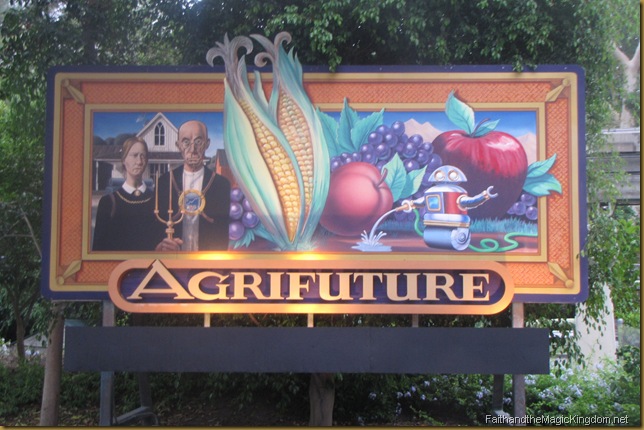 The “Agrifuture” billboard, along the Disneyland Railroad track in Tomorrowland, refers to a frequently overlooked detail. As part of Tomorrowland’s theming, Imagineers theorize that the future’s large population will make open space and food scarce commodities. Accordingly, ornamental landscaping will be replaced with functional gardens that are also beautifully manicured. A closer look at the greenery reveals that vegetables, herbs, and fruit trees are being grown throughout Tomorrowland. (Thanks to Finding Mickey for the basis of that description.) For more on what plants are planted around Tomorrowland, see Plants of Disneyland.

The Imagineers knew that there may be a need in the future for more spaces to be used for food and less for decoration, and so in their vision for Tomorrowland they planned accordingly. Even back when Disneyland was being built, Walt knew the importance of planning ahead when it came to the plants he would need. One of the very first things done during construction of Disneyland was to plant the trees around the waterway for the Jungle Cruise. Why? Because he knew he would need time for these plants to grow in enough that when the park opened the flora around the Jungle Cruise would actually look like a jungle.

Sowing and reaping. It’s one of the most basic principles of life. We get out what we put in. It’s also a Scriptural principle.

About.com has an article about the most common New Year’s Resolutions. Of the 10 resolutions listed, I see that 9 of the 10 can be associated with what we do (both good and bad) during the preceding month or so. For example, consider how these behaviors lead to popular resolutions:

We make the resolutions in January and insist that this year we’re going to stick to them. And then we don’t. We try, but we fail. Somehow, we fail to realize that we’re coming off the most concentrated expression of the bad habits, and the strongest reminder of what is missing from our lives. What we have sown throughout the year, we reap at the holidays. What we have sown throughout the season, we continue to reap in the new year. And yet we’re surprised. Rather than sow different actions, attitudes, and behaviors, we do the same thing every year and then wonder on January 1 why we’re pretty much where we were last year. 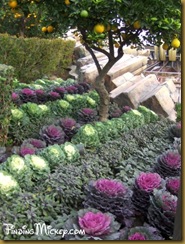 Now I’ll be the first to admit that sometimes the situations and circumstances we find ourselves in are not out fault. But more often than we’d like to admit, they are. The huge financial hole you’re in may be due to an unexpected and severe medical crisis, but it may be due to irresponsible borrowing on credit cards, home equity loans, student loans, etc.The disorganized mess that is your house may be due to having a new baby, but it may be due to a lack of discipline and an excess of laziness.

Think about the last few weeks. What did you not enjoy. What are you dreading for this time next year? How much of that is just a more obvious expression of behaviors and attitudes that are present throughout the rest of the year as well? Don’t blame Thanksgiving and Christmas for it. The stress, frustrations and excesses are simply reaping what we sow through the other 11 or so months of the year, and then we reap in the new year, especially at the start, what we sowed in November and December.

The Imagineers looked to the needs and restrictions of a possible future, and sowed accordingly. Walt Disney looked ahead to what he wanted the Jungle Cruise to be on opening day, and sowed accordingly. And I encourage you, look at what your life has been, especially during the recent holidays. What do you want next year’s Thanksgiving and Christmas (and even the following year’s) to look like? What do you need to sow now to reap those results then?