Architecture of Reassurance: You Can Be Who You Are 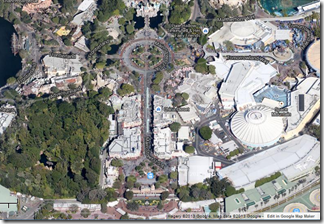 Walt Disney designed Disneyland to stir certain feelings, create certain impressions, and trigger certain memories from the moment visitors steeped through the gates. Main Street U.S.A. was a nostalgic look at a place that never was, yet still existed in the minds and hearts of people. Tomorrowland inspired hope and optimism. Fantasyland bred imagination. Adventureland sparked the excitement of exploration and the unknown. Frontierland stirred pride in America’s past. Guests didn’t have to be told that’s what was happening. They just knew.

All of these worked in part because of the architecture. From the largest buildings and set pieces to the smallest details, Imagineers worked to eliminate visual contradictions—the “messy vitality” John Hench described typical urban environments as having.

In his book The Promise of Progress City, Sam Gennawey quotes Imagineer John Hench this way:

“[Disneyland] tried to present an undilutedly rosy view of the world; contradictions or confusion were qualities the planners of Disneyland associated with defective, poorly planned, conventional amusement parks….Disneyland offered an enriched version of the real world, but not an escapist or an unreal version. We program out all the negative, unwanted elements and program in the positive elements. We’ve taken and purified the statement so it says what it was intended to.”

“Evangelist Billy Graham once told Walt that Disneyland was ‘a nice fantasy.’ This did not sit well with Walt. He replied, ‘You know the fantasy isn’t here. This is very real…The Park is reality. The people are natural here; they’re having a good time; they’re communicating. This is what people really are. The fantasy is—out there, outside the gates of Disneyland, where people have hatreds and people have prejudices. It’s not really real!”

Disneyland is designed to facilitate not only fun experiences with attractions, but also “a sense of welcoming, worth, value, and security.” The berm creates a protected, set apart, even “sacred” space. Buildings & mountains tower while alcoves and porches create quiet and intimate environments. Design and show elements communicate the sense of place, tell you what’s happening, and what your role is in that space.  This design approach is sometimes called “the architecture of reassurance.”

What we see around us every day and take for granted as “reality,” isn’t—or at least it doesn’t have to be. The facts and circumstances are what they are, but to a large extent our reality, the way we see, interpret, and relate to the world, can be changed. Where we focus, what we think about, and how we choose to respond can all change, and in doing so can affect our world around us and in that sense actually alter reality.

You may be thinking, “But you don’t know what I’m going through! It’s not that simple.” I didn’t say it was simple, but these aren’t my words, either.

“I am not saying this because I am in need, for I have learned to be content whatever the circumstances. I know what it is to be in need, and I know what it is to have plenty. I have learned the secret of being content in any and every situation, whether well fed or hungry, whether living in plenty or in want. I can do all this through him who gives me strength.” (Philippians 4:11-13)

Paul was in prison when he wrote each of these statements—a prison he surely he knew he wouldn’t be released from. And in the midst of it he talked about being content, thinking of good and pure things, setting your minds above. He didn’t deny his circumstances or environment—he couldn’t. But he chose to “program out all the negative, unwanted elements and program in the positive elements.” In doing so, he rose above his circumstances and lived as the person he truly was, the person he was made to be.

Our challenge today is to do the same thing. So much screams for our attention. Voices whisper to us messages that directly contradict what God says about us. We run ourselves ragged and focus on surviving today. We live in a world of contradiction in our hearts and minds, lacking “a sense of welcoming, worth, value, and security” and there is no reassurance.

Through Paul, God calls you to program out the negative, unwanted elements and program in the positive elements. Intentionally allow Him to build your spirit with the architecture of reassurance. Listen to His voice and what He says about you, not anyone else. Seek Him and His Kingdom first instead of the things that scream for your attention. Choose to take time to do these things, and to rest in Him—not be lazy or have no goals & plans, but not to pursue them at a breakneck pace. Cast your cares on Him rather than worry and fret.

It’s not easy. It takes attention, discipline, and practice. But, as I saw on a sign during the Disneyland Half Marathon I ran recently, “if it was easy, we’d all be doing it.” In doing so, though, you live as the person you can be, the person God made you to be.

Question: In what area of your life do you most need “the architecture of reassurance”? What is one way you can allow God to build it today? Talk about it in the comments below, or on our Facebook page.