Attention to Detail: God is in the Details 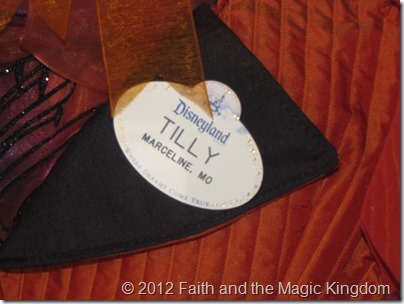 The Imagineers didn’t have to put a nametag on the “ticket seller” in front of the Main Street Cinema, and they certainly didn’t have to make her be from Marceline, MO, but they did.

If you were to ask a Disney parks fan what it is that makes Disneyland (or Walt Disney World) unique and special, you may get several variations on the answer. World-class service. Fun for the whole family. Great storytelling. But one phrase that’ll you’ll hear more than almost any other is, “Their attention to detail is amazing.”

It’s true. Whether it’s the details that support the story in a queue, the details that make what could be an ordinary play area exciting, or even the details in the landscapes and buildings that combine to tell a single story, Walt Disney Imagineering does detail to a degree and in a scope that is unmatched.

But why does this matter to us? One reason that comes to mind is our almost subconscious understanding that when the little details are right, we know the people behind them cared about and paid equal attention to the big picture, major parts, too. They cared enough to craft a story for each balcony in New Orleans Square, to put so many jokes and references in the Disneyland Cast Members’ window on Main Street, and to use authentic props in the queue for the Indiana Jones Adventure, we board the attractions confident that it’ll be good. If they took so much care in the little things, we know they’ve handled the big things, too.

Architect Mies van der Rohe said, “God is in the details.” This may not be how he meant it, but van der Rohe was absolutely right. God cares about the details in our lives.

Are not two sparrows sold for a penny? Yet not one of them will fall to the ground apart from the will of your Father. And even the very hairs of your head are all numbered.So don’t be afraid; you are worth more than many sparrows. (Matthew 10:29-31)

Do you see what Jesus is saying here? God cares for you, so much that He’s numbered the hairs on your head. God is involved in a single sparrow falling to the ground, and you are worth more than many sparrows. He is in the details.

God is involved in those tiny details, and so we can be assured that He’s also got the “big stuff” covered. At Christmas, we celebrate His coming to “dwell among us” as a baby born in a feed trough to a poor family. From the majesty of Heaven, fully God, to the most humble of beginnings, fully man. Or as Paul said,

Your attitude should be the same as that of Christ Jesus:

Who, being in very nature God,
did not consider equality with God something to be grasped,
but made Himself nothing,
taking the very nature of a servant,
being made in human likeness.
And being found in appearance as a man,
He humbled himself
and became obedient to death—
even death on a cross!
Therefore God exalted Him to the highest place
and gave Him the name that is above every name,
that at the name of Jesus every knee should bow,
in heaven and on earth and under the earth,
and every tongue confess that Jesus Christ is Lord,
to the glory of God the Father.

There is no detail too small for God. There is no problem to big for Him. He has been as low as one can be, and above all there is. There is no concern so insignificant that He doesn’t want you to tell Him about it. There is no triumph or success so enormous that it’s bigger than He is.

Those little details found throughout Disneyland each stand as a reminder that God is in the details, so we know He’s also got “the big stuff” handled. He created the universe. He created all living things. He created you. He shaped and designed you uniquely for His purpose. He knows the number of hairs on your head. From one extreme to the other, He’s in it all.

Question: What is one “little detail” in your life that reminds you of something big about God? Talk about it in the comments below, or on our Facebook page.