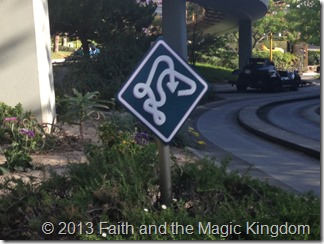 The Tomorrowland Autopia was designed by Imagineering Legend Bob Gurr, is one of four Autopias that have existed at Disneyland, and is the only one that was an Opening Day attraction. (The other three were Junior Autopia, Midget Autopia, and Fantasyland Autopia).

When the attraction first opened, there was no guide rail for the cars, so drivers could not only bump each other (as they can now—though they’re not supposed to), they could pass each other, swerve into each other, and possibly even go the wrong direction. The center rail was finally added in 1965, 10 years after the attraction opened.

As with nearly all Disneyland attractions, there have been several modifications to the Autopia over the years, including at least eight versions of the cars themselves, and multiple iterations of the track. The current version of the attraction, clearly sponsored by Chevron, is more whimsical that the previous ones had been, with a large video screen near the attraction’s start showing cars telling jokes (usually bad ones), and there are several signs throughout the attraction that are also tongue-in-cheek—including a “Mouse Crossing” sign, one that warns “Pavement Ends 5 Feet” (that’s not very helpful so close to where it happens!) and a series that shows what the track is supposedly going to do next—first a right turn, then an “S” curve, and finally a bizarre, twisting path (pictured above). Some of the signs are helpful. Others…not so much.

As Christians, we often like to look for, and ask for, “signs.” Not necessarily something supernatural or show-stoppingly miraculous, but something that at least gives us a clue of what we’re supposed to do next. But we have two problems when we do that: we forget we already have a guide rail, and we look so hard for signs that what we see ultimately becomes unhelpful (even counterproductive).

I frequently hear people say—and have said myself—“I wish God would give me a sign to show me what He wants me to do!” But He’s already told us a good portion of what He wants us to do. Things like…

How are you doing on those? These are the guide rail, the basic path to follow. And they’re important for two reasons. First, if you’re not following the guide rail, any signs along the road will be useless, because you won’t be able to follow them. Second, if you’re not already doing those things that He’s made abundantly clear (or at least making every effort to do so), why should He give you any more information? If you want to know what to do, but you’re not doing the general things He’s told you to do so far, why should He tell you any specifics? If you’re not already obeying Him, what reason does He have to expect that you’ll start doing so with an extra revelation?

What if you are doing those—not perfectly, of course, but growing in obedience to the Lord? It’s fine to ask for a sign (I have), and to expectantly look for a response. Just be sure you’re willing to accept His response, whatever the sign may be. This is the other place we sometimes get in trouble. We know what answer we want, or think we should get, and so we look hard for that sign, even if He’s sending a pretty clear message saying something else.

I ask which way to turn, but I want to turn left. I get a sign that indicates I should turn right. Not what I want, so I keep looking and see an “S-curve.” If I follow that one I can go left, but I have to go right first. I really don’t want to turn right, so I keep looking. The more I look, the more twisted and convoluted the signs—or at least what I perceive to be signs—become, until they’re just tangled messes. And then I get frustrated that God isn’t answering my prayer.

James 1 says, “If any of you lacks wisdom, you should ask God, who gives generously to all without finding fault, and it will be given to you. But when you ask, you must believe and not doubt, because the one who doubts is like a wave of the sea, blown and tossed by the wind. That person should not expect to receive anything from the Lord. Such a person is double-minded and unstable in all they do.”

One of the main themes of the book of James is “faith without works is dead.” If you ask God for wisdom in faith, that implies that when He gives you the wisdom you ask for, you will act on it. It means telling God, “I don’t know what to do in this situation, so I’m asking You. And I commit right now, before even getting the answer, whatever You tell me to do, whatever direction You indicate, I’ll do it, no matter what it is.” That is asking in faith. Continuing to look for the answer you want is doubting—and if that’s the way you ask, don’t expect an answer.

It’s easy to ask for a sign, and it’s easy to look for the sign we want, or that we think is best. It’s harder to do what we already know to do, and harder still to accept an answer to a prayer for guidance that isn’t the one we want. But if you want to receive a helpful sign and not a tangled mess, that’s what must be done.

Question: What are you asking God for direction on in your life right now? Are you willing to commit to Him right now that you’ll follow His direction, no matter what it is? Talk about it in the comments below, or on our Facebook page.