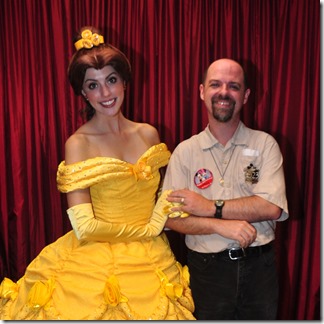 I wrote recently about one of the princesses who has a stage show in the new Fantasy Faire area at Disneyland, Rapunzel. There is another princess who has her story told in the Royal Theatre as well, my favorite Disney princess, Belle.

Though she is my favorite princess, in many ways, the story of of Beauty and the Beast isn’t really Belle’s story, it’s the Beast’s. After all, the movie opens focused on the Beast (as a prince, before he was cursed), and we learn right away what his biggest issues are: he is “spoiled, selfish, and unkind.” Because of this, he is cursed, being transformed into this hideous Beast, knowing he must learn to love, and to find someone who would love him in return, before his 21st birthday or he would be trapped in this form forever. (There’s a whole aside about how unfair it is to do this to an 11-year-old, who is also apparently an orphan, but we won’t get into that.)

For 10 years he waits, hidden in his castle—now more of a prison—believing no one could ever love him. “After all, who could ever love a Beast?” It’s only when Belle comes and, though afraid at first, she learns to look past his exterior—both his physical exterior and the emotional walls—and see the prince inside. She does come to love him, and he loves her. Though they are almost destroyed, in the end the curse is broken by true love—for a change not the princess rescuing a princess, but a peasant girl rescuing a prince.

What makes the difference? What does Belle bring that is unique among all others in the village? A story. She loves books and stories, and her mind is broadened beyond the provincial world around her, so when she meets the Beast she brings not just beauty, she brings him a new story.

He’s spent almost a decade believing that all he has been is all he can be. There is no one who could love him. Life is hopeless. He deserves what he’s getting. Any hope he had for freedom and redemption is foolish. And then Belle brings him a new story—one that says someone can and will love him. The curse can be broken. He can be restored, not just to what he once was, but to a better version of himself. It just took someone new coming into his story, bringing her own and a new way to understand his, showing him that love is possible and hope is not foolish.

The day of Jesus’ resurrection, on the road to a town called Emmaus two of His disciples were stuck in a story. All they could see around them was darkness, broken dreams, and shattered hopes. When Jesus (whom they did not recognize) came alongside them on the road and asked what they were talking about, they said,

“About Jesus of Nazareth. He was a prophet, powerful in word and deed before God and all the people. The chief priests and our rulers handed Him over to be sentenced to death, and they crucified Him; but we had hoped that He was the One who was going to redeem Israel. And what is more, it is the third day since all this took place. In addition, some of our women amazed us. They went to the tomb early this morning but didn’t find his body. They came and told us that they had seen a vision of angels, who said he was alive. Then some of our companions went to the tomb and found it just as the women had said, but they did not see Jesus.” (Luke 24:19-24)

Did you see it there? “…but we had hoped…” Such a small phrase, but so telling. They knew how the story should go. They knew their biggest problem. They knew the Messiah was the solution…until He wasn’t. And then their hopes were crushed.

“He said to them, ‘How foolish you are, and how slow to believe all that the prophets have spoken!Did not the Messiah have to suffer these things and then enter his glory?’ And beginning with Moses and all the Prophets, He explained to them what was said in all the Scriptures concerning Himself.” (Luke 24:25-27)

The facts hadn’t changed, but their understanding of them did, because there was one thing they were missing: the knowledge that there was one Person who could change everything, and had. Jesus brought His story to them and helped them see theirs in a new and better way.

He does the same thing for you. Like the Beast, you may have been spoiled, selfish, and unkind. You may see yourself as one that no one could possibly love. You see the monster and believe there is nothing else you can be. So you’ve hidden, built walls, and tried to protect yourself. And like the disciples, you had hoped. Maybe you’d hoped for that promotion—or just to get a job. Maybe you’d hoped for a spouse that would meet all your needs and fulfill all your expectations. Maybe you’d hoped for the resolution of a financial problem. You knew what you needed, and it didn’t happen.

Whichever mirror you see yourself in, perhaps in both, Jesus has come to tell you a different story, and to give you a new understanding of your own. He says to you, “You are beautiful to Me. I can change you to be the Prince (or Princess) you were made to be, not this monster or hopeless creature you see yourself as. I love you exactly as you are. You don’t have to earn it. You can’t earn it. Just let Me in. I will help you to become more than you have been, more than you see yourself as, because I will put My Spirit within you. I am the answer. I am what you need. Put your trust and your hope in Me. Give Me your story and allow Me to make it into something new. There can and will be a ‘happily ever after.’ It may not be in your time or in the way you expect, but it will come.”

True love has already broken the curse of sin and death. These were the facts of your story, but no longer, because now you can be in Christ, and in Him your story is new.

Question: Where do you see yourself more today, the Beast or the disciples? How can you give Jesus a chance to change your story? Talk about it in the comments below, or on our Facebook page.