The Berm: Define Your Worldview 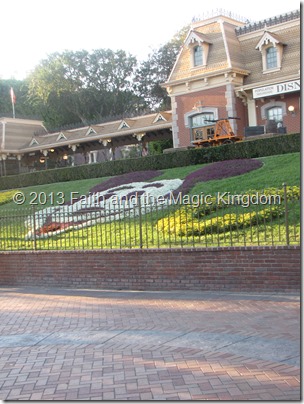 When you “officially” enter Disneyland, after you’ve paid your admission, had your ticket scanned, and crossed through the gates, you’re technically in the park. But you’re still not really “in” Disneyland. Sure, from there you can see the train and the train station and hear some of the music. You may be lucky and be able to meet a character or even see the Disneyland band. You wouldn’t spend a day there and think you’d “been to the park,” though, would you?

Of course not. From here, you have to go through one of the tunnels to get to Main Street U.S.A. and actually be in Disneyland. Those tunnels pass under the train tracks, which sits on something called “the berm.”

Think of a berm as an artificial hill that encircles Disneyland to control the view, and to really be “in” Disneyland means to be inside the confines of the berm . If you’re not looking for it, you’ll probably never notice it, but it’s there, serving that very important purpose. In The Vatican to Vegas, Norman Klein says, “Technically a berm was a shoulder of earth that obscured Anaheim from visitors. As a narrative, the berm was the proscenium arch, marking the reassuring boundaries of the scripted space.” The berm creates your horizon and helps you define what belongs in your experience and what doesn’t.

Your worldview does something very similar for you. Kenneth Samples says, “In the simplest terms, a worldview may be defined as how one sees life and the world at large. In this manner it can be compared to a pair of glasses. How a person makes sense of the world depends upon that person’s ‘vision,’ so to speak. The interpretive ‘lens’ helps people make sense of life and comprehend the world around them. Sometimes the lens brings clarity, and other times it can distort reality.”

Your worldview provides a framework for your beliefs, values, and how you live your life day-to-day. It gives you a context for answering the “big questions.” It’s not meant to give you an excuse to stop thinking critically. Quite the opposite, in fact. It provides a methodology to view and interpret new information and a rationale to accept or reject claims that are counter to your worldview. The more aware of it and intentional you are about it, the better it serves that purpose. Of course, most people never take time to examine their worldview, just as they don’t notice Disneyland’s berm.

There are times when it’s necessary for the Imagineers to “think outside the berm,” if you will. There just wasn’t room inside for changes of this scope and scale. Some of the show buildings for headliner attractions (Pirates of the Caribbean, the Haunted Mansion, and the Indiana Jones Adventure, for example) actually exist outside the berm. Mickey’s Toontown is entirely outside the original one (though “berm” has now been redefined to be “the threshold…isolating the visitor from the street, and inviting a theatrical suspension of disbelief,” according to Sam Gennawey). By that new definition, the “hills” behind Toontown replace the earthen berm as the new threshold.

Sometimes, when presented with significant new information or a dramatic change in life circumstances, something completely outside what your current worldview can handle or interpret, your worldview has to be totally reexamined. It may hold in its original form, but there may be some changes to it based on the “new reality.” The more intentionally and purposefully you conduct that reexamination, though, the more effective it will be. If it’s done subconsciously and haphazardly, the result will be mental, emotional, and spiritual chaos—or worse, the attempt to discard all of it entirely (which is itself a worldview—see, you can’t escape it).

This is what Paul is talking about when he says, “We demolish arguments and every pretension that sets itself up against the knowledge of God, and we take captive every thought to make it obedient to Christ.” (2 Corinthians 10:5) Being able to have a clear, coherent, internally-consistent belief and value system, one that is rooted and grounded in what God says in the Bible, enables us to take every thought and either fit it into our worldview or discard it as being incompatible or inconsistent.

Paul also says, “Therefore, I urge you, brothers and sisters, in view of God’s mercy, to offer your bodies as a living sacrifice, holy and pleasing to God—this is your true and proper worship. Do not conform to the pattern of this world, but be transformed by the renewing of your mind. Then you will be able to test and approve what God’s will is—His good, pleasing and perfect will.” (Romans 12:1-2)

To put that in the current context, Paul is saying that in light of your “new reality” as believers in Christ, saved by God and adopted into His family, examine your worldview. What had once been completely informed by and conformed to the world needs to be reworked. Change your thinking. Start looking for His perspective, and base your worldview on that.

So, how do you do that? What questions do you need to answer to clearly identify what your worldview is, and determine if it is what it should be? There are several ways to approach it, but for now, let me suggest five questions you can answer.

If you’d like a more complete list of questions, see Kenneth Samples’ blog post What in the World is a Worldview or pages 21-22 in his book A World of Difference.

Answering these questions identifies where your berm is, what’s inside of it, and what’s outside of it. They dictate what you do, why you do it, and how you do it. They form your script for how you deal with life. If your answer to any of them reflects something a contradiction between your belief and your behavior (for instance, you answer #4 with “We have no respect for nature,” but you litter regularly), that warrants some extra examination. Do you believe something different than you claim to, or do you need to modify your behavior to align with your belief?

You can’t function for long with what happens inside your berm being inconsistent with the story it was built to tell. The longer you try, the worse life gets, until eventually you’ll come apart at the seams mentally, emotionally, spiritually, and maybe even physically.

Question: How would you answer these five questions (honestly)? Are your behavior and attitudes consistent with those answers? Talk about it in the comments below, or on our Facebook page