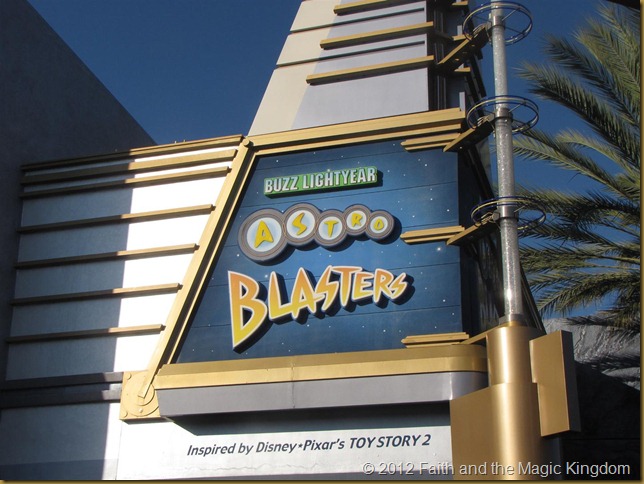 Buzz Lightyear Astro Blasters now sits where two previous attractions (well, one attraction and one attraction queue) one did. The first attraction to occupy this space was the Circarama/Circle-Vision 360, an Opening Day attraction. Technically it was “Opening Day Plus One” (as The Disneyland Encyclopedia calls it), but that’s pretty close. Circle-Vision had various films that showed on the unique 360° screens until September of 1997.

This space was repurposed in 1998 for part of the queue to the ill-fated Rocket Rods. That only lasted until 2000, and then the space sat vacant for a few years. Finally, in March of 2005, Buzz Lightyear Astro Blasters opened! This attraction is another that features a fun queue, thouogh not quite so immersive and interesting as some others. If you’re a fan of the Toy Story movies, though, you’ll enjoy lots of nods to them—both subtle and obvious.

This attraction opened first at Walt Disney World in 1998, and proved to be so popular that it was “cloned” at Disneyland. Now it also exists in Hong Kong Disneyland, Tokyo Disneyland (which actually opened before Disneyland’s), and Disneyland Paris. In 2005, Disney also debuted a home version of the ride as an internet game that allowed users to connect with guests at the parks. The actions and scores of each affected the other.

The Disneyland version has a couple of major benefits/improvements over the Walt Disney World version.

Speaking of strategy, here’s mine: There are circle targets all over, and they are very easy to hit. I ignore them 99% of the time. Why? Consider the point values. Triangles, though rarer and harder to hit, are worth 100 times as much. So for every time I hit a triangle target, I get the same number of points as if I had hit a circle target 100 times. No matter how difficult they are to hit, I can get far more points from triangle targets (I promise you I can hit 3 triangle targets more easily than I can hit 300 circles). 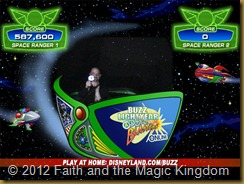 The very same principle is true in your life.

“Let us fix our eyes on Jesus, the author and perfecter of our faith, who for the joy set before Him endured the cross, scorning its shame, and sat down at the right hand of the throne of God.” (Hebrews 12:2)

When you face trials and struggles, where is your focus? Do you focus on the problem, or on a quick-fix solution? That’s the low-point, easy to hit target. It’s harder to look higher, and to aim higher. But that’s what Jesus did. So we fix our eyes on Him, as our example and our strength.

When you dream of the future, are you aiming for the low-point targets that you know you can hit, or do you press on towards “God-size dreams”? Eternal life is about as big as dreams come, but as believers that’s what we’ve been promised. But even more than that, we’ve also been promised abundant life here. That doesn’t mean an easy life, it doesn’t even necessarily mean “success” as the word defines it. It just means doing something for God because that’s what He made you to do.

It easier to be average. There’s much more perceived safety in being mediocre. The problem is, God didn’t make you to be mediocre and have an average life. So shoot for the high-value targets!
Question: Is it easier to aim for the high-value targets in the good times or the bad ones? How have you done it recently? Talk about it in the comments below, or on our Facebook page.