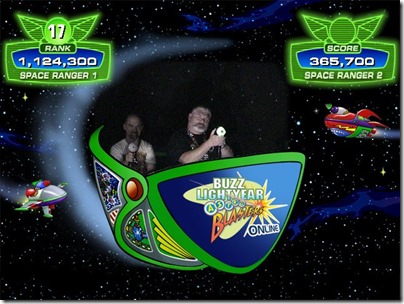 My highest score to date on Buzz Lightyear Astro Blasters

In a previous post, as well as in my book, Once Upon YOUR Time, I wrote about my strategy for getting a high score (as I did in this picture) on Buzz Lightyear Astro Blasters. One thing that makes this attraction relatively unique is that it is both interactive and competitive in nature. Even if you ride alone, there’s always the score on the display in front of you to compete against.

The highest score that will display is 999,999. As you can see in the photo above, it’s certainly possible to get a higher score than that, but this is as far as the display can go. In fact, theoretically there is no limit to the score you can get. If you’re in the right places long enough, a score well into the millions is conceivable.

If that’s the case, then what’s the goal when riding? It can’t be to get the highest possible score, because there isn’t one. So what do you consider a success when riding? Is it…

Your definition of success here can’t be the highest conceivable score, because that will always be out of your reach. Instead, it must be framed in terms of progress.

Early in coaching sessions, I always talk with clients about their definition of success, and suggest that they incorporate this idea into their definition: “Success is the progressive realization of worthwhile goals.” It’s not achieving a specific goal—although accomplishment of a goal is the last step in the progressive realization of that goal. It’s not perfection. It’s making progress on something significant, taking steps, moving forward, taking risks…and the person you’re becoming while you do that.

And what is the most worthwhile goal there is? Here’s what Paul says:

“So we make it our goal to please him, whether we are at home in the body or away from it.” (2 Corinthians 5:9)

The ultimate goal is obedience, through dependence on God, which leads to becoming like Jesus. The obedience isn’t out of obligation, nor is it to earn salvation, but it’s still an important part of our growth as Christians.

To consider today a success, ask yourself if you’ve made progress. Were you more loving today than yesterday? Did you show more kindness? Did you spend time with God? Did you sense His leading and follow it rather than resisting (or did you resist less than yesterday)? Do you have a deeper understanding of God’s identity, or your Supernatural Kingdom Identity? Not to have achieved perfection, but the “progressive realization” of that most worthwhile goal.

One day, your “score” will be off the charts, when “He who began a good work in you [carries] it on to completion until the day of Christ Jesus”. Today, seek to be better than yesterday—not for your own glory or to earn anything, but through His strength, as your part of growing into the “you” God made you to be.

Question: What is one step you’ve taken, or will commit to taking today, to move yourself forward in the “progressive realization of that worthwhile goal” of becoming more like Christ? Talk about it in the comments below, or on our Facebook page.