Carousel of Progress: Is Now the Best Time of Your Life? 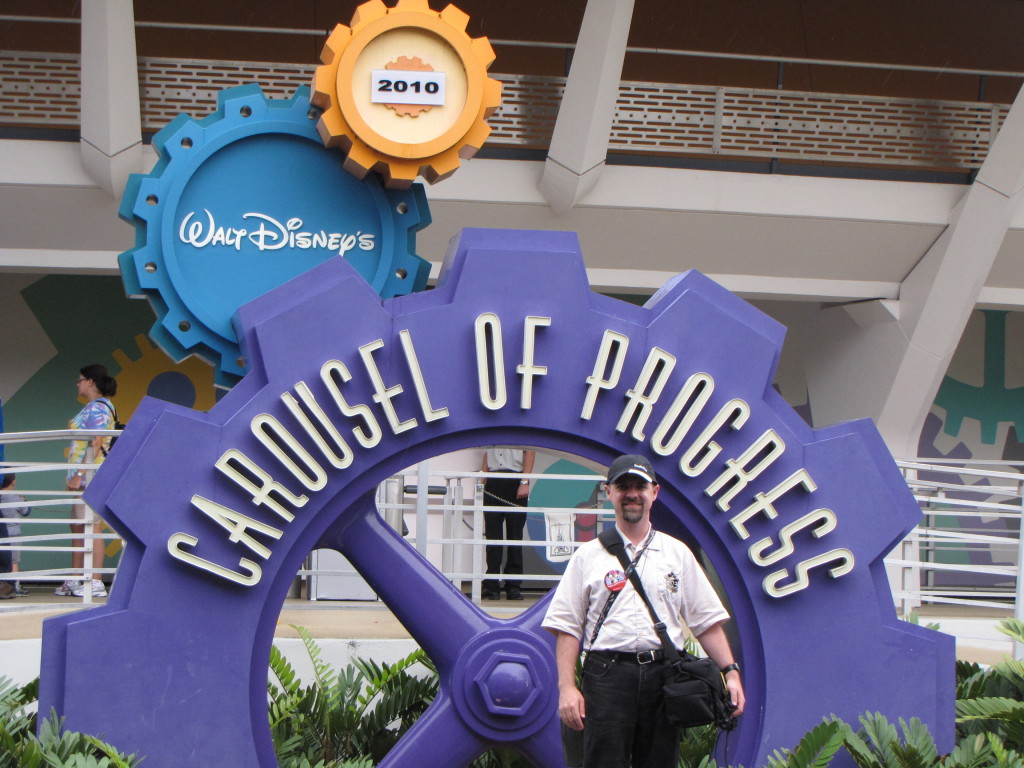 Last week, Disney celebrated the 50th anniversary of “it’s a small world.” But it’s not the only attraction that has a 50th anniversary this year, debuting at the 1964-1965 New York World’s Fair. The Carousel of Progress (originally called Progressland) also opened at Fair at the same time, sponsored by General Electric, to showcase the “the story of electricity in the home from the 1890’s to the present.”

The show began in the 1890’s and each scene, set around a different holiday, moved us about 20 years forward in time, showcasing different appliances in each one, like a gramophone (record player), a kitchen pump, a hand-cranked clothes washer, and a hand-pumped, air suction vacuum cleaner, coffeemaker, sewing machine, refrigerator, and a homemade cooling device for hot weather – an electric fan that circulated air over a cake of ice in the earlier ones. The later ones showed a little round television screen, and a living room at Christmas time. There were also some fun and unusual applications such as the wife mixing wallpaper paste with a cake mixer.

Progressland was the most popular attraction at the Fair, and when the Fair closed Progressland, along with “it’s a small world”, Great Moments with Mr. Lincoln, and the dinosaurs from the Ford Magic Skyway (now in the Grand Canyon diorama of the Disneyland Railroad) were moved to Disneyland. The Carousel of Progress opened at Disneyland on July 2, 1967, and ran until September 9, 1973.

But all was not lost! It was moved to Walt Disney World, and opened in the Magic Kingdom January 15, 1975. … But not without a significant change.

The attraction has undergone several changes in the ensuing nearly 40 years, including periodic updates to the final “present/near future” scene to keep it relatively current, GE discontinuing its sponsorship in 1985 and the original song returning in the mid 1990’s.

These two theme songs reflect two very different views of optimism and hope. Either looking forward to “a great big beautiful tomorrow” or embracing “now” as “the bet time of your life.” Which do you hold?

Jesus said that He came to give us life—not just eternal life, but abundant life in the here-and-now. In 1 Timothy, Paul says that God has given us everything for our enjoyment. That’s great, and it might lead us to say that now really is the best time. Except it’s not.

Paul very clearly addresses this in 1 Corinthians 15 when he says, “If only for this life we have hope in Christ, we are of all people most to be pitied.” If now really is the best time, if this is as good as it’s ever going to get, with treasure that perishes, people who are inconsistent at best, and a feel-good message from the Gospel, we’re in trouble. Or, as The Message translates the same verse, “If all we get out of Christ is a little inspiration for a few short years, we’re a pretty sorry lot.”

Instead, we have eternity with Christ in heaven to look forward to. If the thought of that doesn’t get you excited, I encourage you to listen to the message series “Why Heaven Matters” by Chip Ingram. We really do have a great big beautiful tomorrow–actually an eternal number of tomorrows–shining at the end of this day. No matter how good or bad today, this week, this month, this year, or even your whole life has been, if you are in Christ, the day is coming that will outshine all the good ones, and “our light and momentary troubles are achieving for us an eternal glory that far outweighs them all.”

Now that is something to look forward to!

Kingdom Thinking: Are you looking forward to “a great big beautiful tomorrow” or is now “the best time” and you just can’t imagine the future being better?