City Hall: “What Do You Want Me to Do for You?” 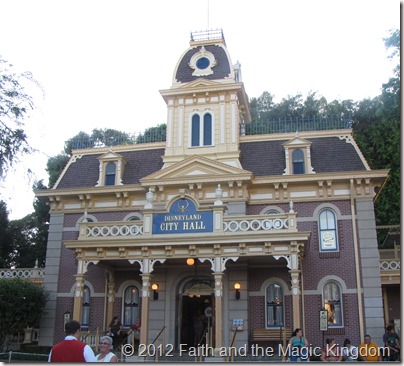 Mark 10 has a pair of interesting stories back-to-back. Today we’re going to look at the second one, and then in the “Off-Topic Thursday” post for this week, go back to the first one.

In verses 46 – 52, Jesus and the crowd of people with Him come near a blind man named Bartimaeus, who is begging by the side of the road. Bartimaeus shouts, “Jesus, Son of David, have mercy on me!” Jesus has this man brought to Him and asks the very same question, “What do you want Me to do for you?” The blind man asks for his sight, and Jesus responds, “Go, your faith has healed you.” Immediately Bartimaeus received his sight.

There are very few reasons you might go to City Hall. Offhand, the only ones I can think of are to get a celebration button, put in a compliment (for a Cast Member, show, etc.), or lodge a complaint. There aren’t many other reasons to go in there. When you do, as you approach the counter you will be asked one question, “How can I help you?”

How do you respond? 100% of the time, it’s with a specific request.

All specific, direct requests. We never say anything like, “Well, if it’s OK with you, I’d like to see if I can compliment a Cast Member.” We don’t respond, “If you don’t mind, I was wondering if I could get a birthday button.”

Bartimaeus did the same thing. Jesus asked, “What do you want Me to do for you?” and he told Him, directly, specifically, and without hesitation. Do you do that?

I don’t. Not often, anyway. I make vague requests and couch them in caveats so much that it’s clear I don’t really expect Him to give me whatever it is I really want.

When we pray we say things like, “If it’s Your will…” but we really mean, “You’re probably not going to do this, so now I have an out, a way to justify what seems to me to be an unanswered prayer without actually having to wrestle with anything.” What happened to asking specifically, directly, and in faith?

I don’t know about you, but I ask too little, and do it in a way that if nothing happens I can just say, “Well it must not have been His will,” staying safe, settling, and missing out. After all, Bartimaeus didn’t have to ask for his sight. That was risky. It meant he’d have to completely change the way he lived and dealt with the world around him. He could have asked for a more comfortable mat, or for more people to donate to him, or even a warmer cloak. But he didn’t. He asked for much more than that. He asked that his greatest need–and his greatest desire–be met.

“Ask Me for anything in My Name,” says Jesus.

Jesus again: “Ask and you will receive.”

“You do not have, because you do not ask God,” says James.

So many clear and direct statements, where Jesus essentially says to us, “What do you want Me to do for you?” Do you ever directly answer His question, and actually believe He’ll do what you ask?

Not asking, or skirting the issue is really taking the matter out of God’s hands. It’s saying to Him, “I don’t think You’re going to do this for me, so I just won’t ask, certainly not in a way that I have to actually put my faith in You for the answer and risk You saying no.”

Question: Answer His question. Clearly and specifically, what do you want Jesus to do for you? Are you willing to actually say it? Share it in the comments below, or on our Facebook page.