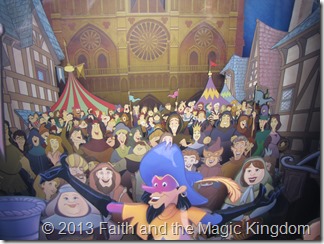 Fantasy Faire opened at Disneyland in March of 2013, and besides the two stage shows and princess greetings, there are a few interactive elements in the area. One of the most unique, and my favorite of these is Clopin’s Music Box.

Just to the left of the entrance to the Royal Hall (where the princesses wait to greet their guests) stands this large music box with a hand crank on the front. As guests turn the crank, the scene inside (which not only contains Clopin and Quasimodo, but also many characters from other Disney animated features) while a music-box style version of the song Topsy Turvy plays. It’s yet another example of one of those things Imagineers didn’t have to do, but it makes the area so much more enjoyable and “real” feeling because it’s there.

I’ll be the first to admit that there are some very dark elements to the Disney’s 1996 animated feature, The Hunchback of Notre Dame. At the same time, though, it has one of the best songs to come out of a Disney movie (God Help the Outcasts), and some stunning visuals. The opening song to the movie, the same one used in the music box, sets the stage exceptionally well for what’s to come in the film, and the idea of it (though not the specifics) are quite informative for us today.

In case you’ve never heard the song, Clopin and the crowd sing about “Topsy Turvy Day,” January 6th (or “the sixth of Januervy,” as the song says it), a day when the norms and social conventions of Paris are turned upside down. The humble (like the common man, and the “bums and thieves and strumpets”) are celebrated, and the exalted (like kings and priests) are mocked. The people indulge in laughter, merriment, and celebration. And the highlight of the day is the crowning of the “King of Fools,” the ugliest person in Paris.

It’s at once entertaining and disturbing. The song is infectious and fun, but when you really listen to the lyrics, what it celebrates borders on debauchery. In spite of this, though, the concept rings a bell…so to speak.

“For the message of the cross is foolishness to those who are perishing, but to us who are being saved it is the power of God. For it is written: ‘I will destroy the wisdom of the wise; the intelligence of the intelligent I will frustrate.’…Jews demand signs and Greeks look for wisdom, but we preach Christ crucified: a stumbling block to Jews and foolishness to Gentiles, but to those whom God has called, both Jews and Greeks, Christ the power of God and the wisdom of God. For the foolishness of God is wiser than human wisdom, and the weakness of God is stronger than human strength….But God chose the foolish things of the world to shame the wise; God chose the weak things of the world to shame the strong….Therefore, as it is written: ‘Let the one who boasts boast in the Lord.’” (1 Corinthians 1:18-31)

The Kingdom of God is a “topsy turvy” kingdom.

Consider your own life. What do you value most? Success? Achievement? Having it “all together?” Being financially secure? Prosperity? Health? Significance? There’s nothing inherently wrong with any of those, but are they your top priority? Are they what you seek after the most? Or do you prioritize time with God, service, relationships, giving, and taking risks for God?

It’s not easy to be contrary to the wisdom of the world, but the wisdom you follow, the truths you accept, are an important indicator of which kingdom your heart really belongs in—God’s, or the world’s.

Question: Consider your bank account, your discretionary time (yes, you have some), and what preoccupies your thoughts most often. Which kingdom does your heart fit most comfortably in? If it’s not the one it should be, what is one step you can take to change it? Talk about it in the comments below, or on our Facebook page.