Club 33: Benefiting From What Others Have Done

On November 17, 2013, I finally had an opportunity I’d been waiting 20 years for. Thanks to a kind reader of this blog, my wife and I went to Club 33 to celebrate our anniversary, my birthday, and the release of Faith and the Magic Kingdom. I first heard about this exclusive, private club in New Orleans Square shortly after my best friend and I started going to the park in 1993, and I’ve wanted to dine there–or even just go inside–ever since.

In case you’ve never heard of what has become one of Disneyland’s worst-kept secrets, I’ll give you a brief primer on it. When Walt Disney with promoters for the 1964-1965 World’s Fair, he noticed various “VIP lounges” for corporate sponsors, and this gave him the idea for something similar at Disneyland, to be placed in the under-development new land for the park. Originally it was planned for corporate sponsors and VIPs like visiting dignitaries.

Unfortunately, Walt passed away in December of 1966, but the club didn’t open until May of 1967. At that time, since the original purpose was no longer possible, Disney opened the club to private memberships as well. These are very pricey and very limited, with the wait list at one time extending more than a decade.

Club 33 itself is ornately decorated, including props from films, pieces commissioned exclusively for display in the club, and memorabilia from Disneyland history. It’s also the only place in Disneyland park that one can buy alcohol.

For a Disney fan, especially one who cares deeply about the park and about Walt Disney and his legacy, a simple description doesn’t do justice to the experience. The food was excellent. The atmosphere was upscale but not stuffy. The view from the balcony is one I never even imagined I would ever have. Being able to look at the decorated balconies at eye-level instead of up was the most wonderful unexpected surprise. 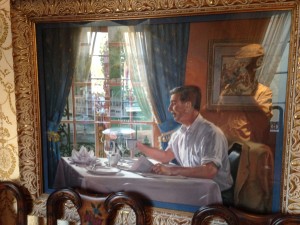 There’s even a painting of a scene that never happened: Walt Disney sitting at a table for two, looking out the window towards the Rivers of America. Based on the view and the location he appears to be in the dining room, this is painting shows him at what could be the very same table Faye and I sat at for our lunch.

Of course, I know that didn’t happen, because the club didn’t open until 5 months after he passed. We enjoyed the benefit of something he created but never got to experience.

“These were all commended for their faith, yet none of them received what had been promised, since God had planned something better for us so that only together with us would they be made perfect.”

The history of our faith goes way back to them, but because they were pre-Christ, they didn’t get the full benefit of what they were promised at the time. Yet without them, without their testimony, their witness, their example, and their faithfulness, you very well may not have even had the opportunity to hear about Jesus.

Let’s also take this the other direction. Who will some day look back at you and say, “If it weren’t for that individual, I wouldn’t be here today”? What are you doing that will benefit people other than you long after you’re gone?

Like Club 33, other parts of Disneyland were conceived of by Walt Disney but never seen physically completed by him. We benefit from work he did but didn’t reap the benefit of. Our faith heritage traces back to those who were faithful but didn’t see the full fruit of it.

Question: What you have (physically and otherwise) you owe to those who came before. What will those who come after you have to say about you with that?