Disneyland: What’s in a Name? 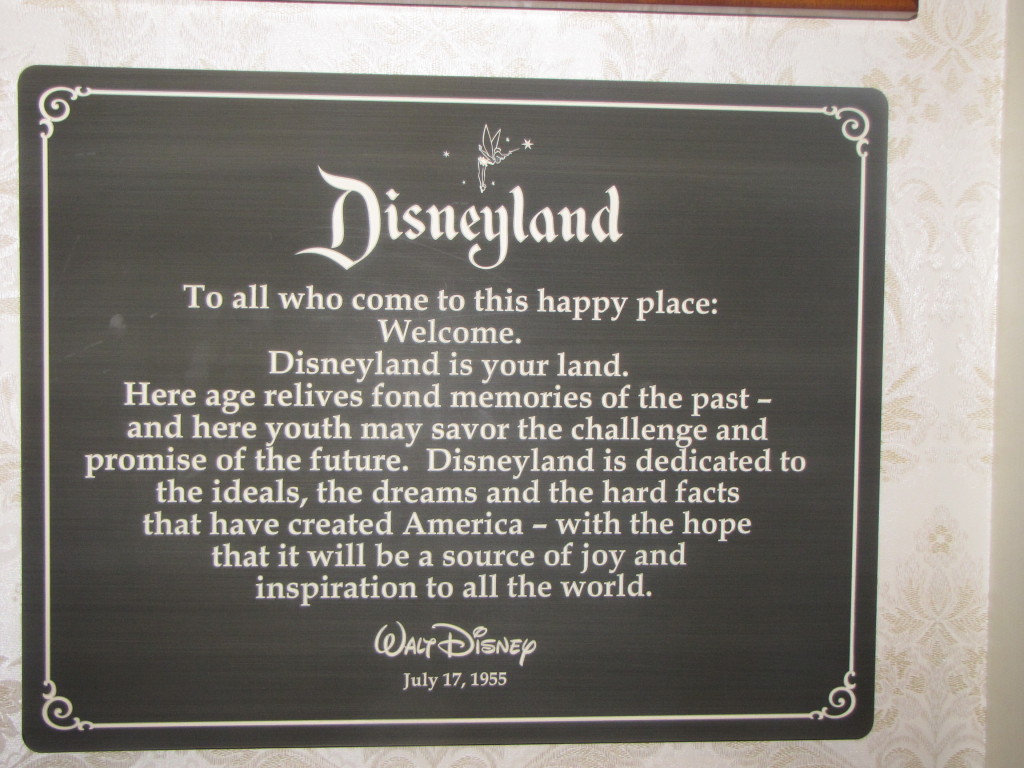 It probably only seems natural that Disneyland, is named “Disneyland.” Anything else would just sound strange, wouldn’t it?

But it did have some previous potential names. When Walt Disney came up with the idea for a park of some kind for guests to go to, since so many wanted to come to the studio and meet Mickey Mouse, it was going to be called “Mickey Mouse Park.” When he conceived of a traveling exhibition of miniatures, it was to be called “Disneylandia.” Finally, though, we got “Disneyland.”

I recall hearing a story once, though the exact details escape me. (If someone knows them, please fill in the blanks for me.) Either in regard to the Studio or to Disneyland, some employees were unhappy that their names weren’t featured more prominently. They were pointedly reminded that it was Walt Disney’s name on things, and it would always be that way. Many were involved in the work, but ultimately it was his.

As the “Florida Project” was being developed, it was originally to be called Disney World (Or possibly Disneyworld). In How to be Like Walt, Pat Williams says, “As construction proceeded, Roy [Disney] announced a small but important change to the name of the new Florida theme park. ‘It’s going to be called Walt Disney World,’ he said, ‘so people will always know that it was Walt’s dream.'”

[A quick aside: this is why it bothers me when people (usually innocently) refer to Walt Disney World as simply “Disney,” and when the company itself refers to Walt Disney World and Disneyland as “Disney parks.” These are vague and meaningless concepts. Disney is a corporation. Disney parks is a division. Both of these lack the heart, the memories, the connection, the warmth, and the personality that comes with their proper names. Some shortening makes sense, but this strips it of nearly everything important.]

Names are important. Your name matters. Names give a sense of identity, sometimes giving hints of character, always providing a means of identification. Disneyland wouldn’t have the same identity if it were called something else. The same is true of the individual lands. Imagine trying to “simplify” Frontierland to “that part of the park where there are westerns and stuff about history and river boats and an island.” Or Main Street U.S.A. to “that part of the park after you come in that’s like a turn-of-the-20th-century small town midwestern street, but not exactly that because it’s better, but still kind of the same.” Looses something, doesn’t it?

God’s name is pretty important, too. Names, actually, as He is called by several in the Bible. In each case, they tell us something significant. Usually they reflect an aspect of His character that was important to that part of the narrative. Today we often try to simplify His names, calling Him something that makes more sense to us. “Lord” becomes “leader.” “Savior” becomes “forgiver.” “Master” becomes “boss.”

Sure, these are easier to understand, but I think we miss something if we always refer to Him in these simplified ways. Perhaps it’s worth considering some of His other names. Learn what they mean. Use them when you talk to Him, or even when you talk to others about Him, because they each reveal something crucial.

Here’s a short list to get you started (adapted from this article on Bible.org):

God’s names are important. And even more than that, as a believer, as a disciple of Jesus, you are called by His name.

“Do not be afraid, for I am with you;    I will bring your children from the east    and gather you from the west.I will say to the north, ‘Give them up!’    and to the south, ‘Do not hold them back.’Bring My sons from afar    and My daughters from the ends of the earth—everyone who is called by My name,    whom I created for My glory,    whom I formed and made.“

You are called by His name. You were created for His glory. Is there a better reason to know and use His names? After all, they tell you something about the One you belong to, what He can do, Who He is, and what He wants. You can get by without knowing anything about them, or by simplifying them, but you’re missing out if you do.

Kingdom Thinking: Which of the names listed is most meaningful or important to you right now, at this moment? What do you need to be reminded about God’s identity and character?