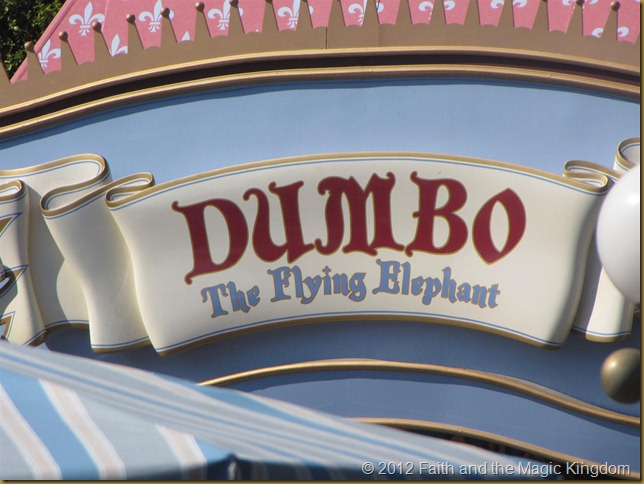 Dumbo the Flying Elephant isn’t quite an Opening Day attraction, but it was close, opening just about a month later (August 16, 1955).  The attraction is, of course, based on the 1941 animated feature, Dumbo. The movie is based on a children’s story that was prepared to demonstrate the prototype of a toy storytelling display device called a Roll-a-Book. It had only 8 drawings and just a few lines of text, so Disney was really free to develop the story as they desired.

When the attraction was being developed for Disneyland, it was going to carry on a storytelling technique that was also being used in the Fantasyland dark rides—one which most guests never seemed to grasp. None of the title characters appeared in their attractions (Peter Pan, Snow White, etc.), with the idea being that the guests themselves took on the role of the title character. This was never clearly explained, though, and guests frequently went to Guest Relations to ask why (for example) Snow White wasn’t in her attraction. As part of the New Fantasyland in 1983, the characters were added to their respective attractions.

Dumbo had them all beat, though. The working title of the attraction originally was “10 Pink Elephants On Parade”, themed to the Pink Elephants sequence from the movie. Walt Disney objected, not wanting his guests to ride in vehicles themed to a drunken hallucination and ordered them to be painted gray. And so, when the ride debuted, guests rode in 10 representations of Dumbo himself. (In 1990, the attraction was updated and expanded to include 16 ride vehicles rather than the original 10). 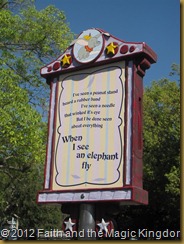 When we think of what we can draw from Dumbo, we go back to the movie. One of the shortest of the animated features (it was the shortest until 2011’s Winnie the Pooh beat it by 1 minute and clocked in at 63 minutes), it’s still packed with reminders and lessons. We could talk about letting go of our “security blankets” and trusting in what God has already given us, or the value of having someone who believes in us, the reality that sometimes people can be cruel, sometimes finding yourself up a tree is the best place you can be—where else will you discover you can fly?, and more. We may come back to some or all of those later, if there’s interest. For today, though, let’s look at one of the most obvious lessons…

God made you unique, and only when you embrace your God-given uniqueness will you really be able to live as He designed you to. Dumbo’s ears made him unique, but for quite a while, he tried to hide them or ignore them. But that didn’t work. They kept coming up, getting in his way, almost demanding attention. When he was finally able to use them and be the way he was designed, he flew! Before then, his ears made him unhappy and frustrated. They made him the subject of ridicule, but sometimes that’s what happens. That which makes us different also makes us subject to criticism by those who think we should be just like them.

But we answer to God, not those people. And He has something different to say:

“For by the grace given me I say to every one of you: Do not think of yourself more highly than you ought, but rather think of yourself with sober judgment, in accordance with the measure of faith God has given you. Just as each of us has one body with many members, and these members do not all have the same function, so in Christ we who are many form one body, and each member belongs to all the others. We have different gifts, according to the grace given us.” (Romans 12:3-6a, NIV)

Our uniqueness isn’t because of anything we’ve done, or earned, or deserve. It is “according to the grace given us.” But doesn’t that also mean that to reject our uniqueness and try to “fit in” is to reject a measure of His grace?


Question: What uniqueness has God given you, and are you using it? Talk about it in the comments below, or on our Facebook page.