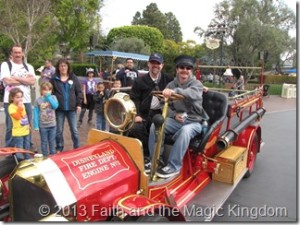 Last week, we began our look at the motorized vehicles of Main Street U.S.A. and the way they illustrate different approaches to being a Christian. The Omnibus represents Tourist Christians—those who are in it for the fun and what’s in it for them, but when the going gets hard or they have to actually take some responsibility for their walk with Christ, they start looking for the easy way out.

For a brief history of the introduction of these vehicles to the park, see the first post in the series. The Fire Engine was based after a turn-of-the-century hose-carrying fire engine. It’s not quite that antique, though. The bell and siren are authentic, but the rest was created in the Studio Coach shop, designed by the talented Bob Gurr. He’s often said that if it moves on wheels at Disneyland, he probably designed it. That certainly proves true here on Main Street U.S.A., as all of the motorized Main Street vehicles were designed by him. In fact, it’s also unique because in order to get it to the park from the location where it was built, Bob Gurr drove it down the Santa Ana Freeway to the park!

The fire engine has a very different purpose from the Omnibus as it represents turn-of-the-century America, and it represents a different way some people live the Christian life.

Rarely will you find a fire engine cruising around town. It shows up at fires to put them out, and then leaves. As a rule, it’s reactive not seeking out ways or locations to prevent fires, just coming to stop the ones that have started. That’s what they were made for, and there’s nothing wrong with that…for fire engines.

Fire Escape Christians have the same strategy. It’s not that these people don’t genuinely believe—often, they do. But the motivation is all messed up. Their question is, “What do I have to do to avoid punishment?”

Accept Christ to avoid Hell. Do what you have to out of fear that not doing “enough” means you’ll end up there anyway. There’s no room for grace here, no room for love or faith or joy. It’s a reactive way to be a Christian, doing things (and not doing other things) strictly to avoid Hell and not to draw near to God. Serving out of obligation and, again, fear of consequences. Avoiding Hell is a good thing, but it’s not enough to have the “abundant life” Jesus promised.

Of course, this is assuming they do anything that all. The other variation of this kind of Christian is the one who accepts Christ and that’s it. It goes no farther. They figure they’ve got their “Get Out of Hell Free” card, so that’s sufficient. No need to grow, or change, or repent, or serve, or anything else. Just claim the name of Jesus and then go about their merry way.

These disciples run the risk of being exactly the people Jesus talked about in Matthew 7:21-23…

“Not everyone who says to Me, ‘Lord, Lord,’ will enter the kingdom of heaven, but only the one who does the will of My Father who is in heaven. Many will say to Me on that day, ‘Lord, Lord, did we not prophesy in Your name and in Your name drive out demons and in Your name perform many miracles?’ Then I will tell them plainly, ‘I never knew you. Away from me, you evildoers!”’

Or of being the ones Paul described in 1 Corinthians 3:

“If anyone builds on this foundation using gold, silver, costly stones, wood, hay or straw, their work will be shown for what it is, because the Day will bring it to light. It will be revealed with fire, and the fire will test the quality of each person’s work. If what has been built survives, the builder will receive a reward. If it is burned up, the builder will suffer loss but yet will be saved—even though only as one escaping through the flames.”

There can be so much more to the Christian life than being a Fire Escape Christian.

Question: How can you recognize a Fire Escape Christian…or your own tendency to be one? Talk about it in the comments below, or on our Facebook page.