Frozen: Should You “Let It Go” or “Build a Snowman”? 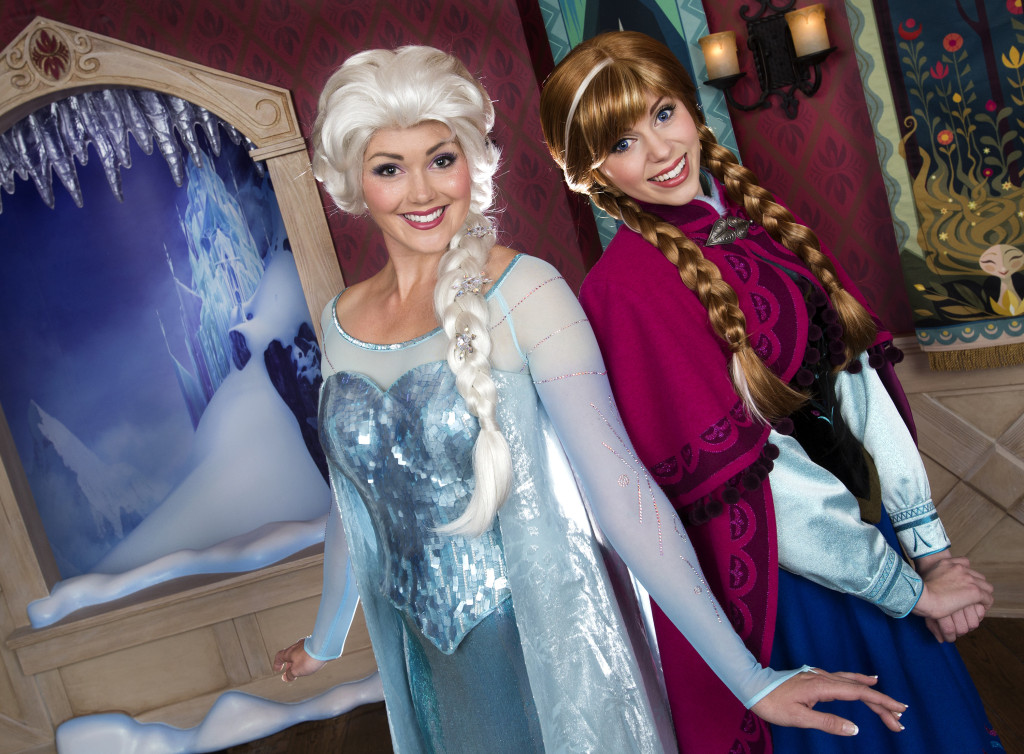 Image (C) Disney – Because I haven’t been willing to wait in line 2 hours to meet them yet.

Without a doubt, Frozen is the most popular Disney animated movie right now, and Anna & Else two of their most popular characters. Whether you liked the movie or not, the box office doesn’t lie: as of this writing it has grossed $1.050 billion globally, making it the 12th highest grossing movie and the second highest grossing animated feature of all time!

Now that Rapunzel has a new home in the Fantasy Faire portion of Fantasyland, Anna & Else have moved into her former meet-and-greet location, next to Pinocchio’s Daring Journey. Wait times to meet these two can easily top an hour and a half, even on slow days!

Maybe even more popular than the characters themselves, though, is Elsa’s signature song, Let it Go. It won the Academy Award for Best Song, and you can’t turn around twice online without finding a cover of it, a parody of it, or some other rendition.

And not without good reason. This song, a cross between an an “I Am” song (a song that describes a characters situation)  and an “I Want” song (a song that tells us what motivates a character), is a powerhouse. The music alone is stirring, and when sing by Idina Menzel it’s inspiring, practically making you want to stand with Elsa and shout, “Me too!”  Entertainment Weekly’s Marc Snetiker described the song as “an incredible anthem of liberation.”

He’s not wrong, but there’s more to it. The song is a stirring, inspiring, motivating anthem…that leads to destruction. The song starts with Elsa recognizing that what makes her different, her ice powers, has kept her isolated and now has driven her away from her kingdom. She remembers what her father told her, “Conceal, don’t feel,” and embraces that she’s past that–literally above it. She glories in her power and fully letting it out for the first time ever. “Let the storm rage on!” She’s no longer afraid, because limits no longer apply to her.

She concludes the song–after using the word “fractals”, which always makes me happy–having created a palace and a dress from ice (how does that work, exactly, especially when winter goes away?) and celebrating with the words “Here I stand / In the light of day / Let the storm rage on, / The cold never bothered me anyway.”

Perhaps not, but it’s bothering a lot of other people. The kingdom of Arendelle is locked in a severe winter that’s destroying it. The people are suffering. The economy is crumbling. People are afraid. The very things she’s singing about, because they’re being taken to extremes and are entirely self-focused in her “kingdom of isolation,” are the things that are demolishing everyone else’s world.

The Heart of Frozen

While Let it Go is a powerful and moving song, and for as popular as it is, it’s not the heart of the film. Left unchecked, the message in Elsa’s song is harmful in so many ways. In fact, while in terms of sound and style it’s most similar to Wicked’s Defying Gravity, lyrically it’s more similar to No Good Deed.

The real heart, the song that celebrates all the things that are actually worth fully embracing: love, kindness, family, risk of rejection, other-centeredness, and even fun, is  Anna’s song, Do You Want to Build a Snowman.

Anna is lonely, sure, but she’s also concerned for her sister. She loves Elsa and just wants to be with her. Near the end of the song she tells Elsa, and us, exactly what motivates her, what’s going to drive her through the rest of the movie: “I’m right out here for you, just let me in / We only have each other / It’s just you and me.”

It’s this love that ultimately makes the difference and saves the day. (To be as spoiler-free as possible if you haven’t yet seen the movie, I won’t say how.) And that love is first clearly shown in Do You Want to Build a Snowman. For as catchy and stirring as Let it Go is, if I’m going to emulate the sentiment and message of a song, and encourage others to do the same, it’s this one.

Elsa wasn’t trying to be mean to people or destructive to the kingdom–though that was scant comfort to the people afflicted with the results of her “freedom” and “empowerment.” She was afraid. Grand Pabbie was very clear when he told her, “Fear will be your enemy,” but instead of her and her parents taking that to heart, she was raised immersed in fear. She felt she needed to be isolated, because that’s what she’d been taught for years. Her reaction was natural–but not everything “natural” is also “good.”

Anna, on the other hand, is very intentional with using what she has, her heart, her love, and her dedication to her sister, to save Elsa and the Arendelle. It’s as if the apostle Peter had given her the same charge he gave us:

“Above all, love each other deeply, because love covers over a multitude of sins.”

That’s exactly what Anna did. And it’s what we need to do. Anna’s love for Elsa restored both Elsa and Arendelle. The eternal winter was broken. The isolation of “the Snow Queen” was ended. Peace and joy were restored to the kingdom. But it didn’t come from Elsa’s fear and isolation turned celebration of unrestrained freedom in Let it Go. It came from Anna’s dedication, love, and willingness to risk being hurt that was first demonstrated in Do You Want to Build a Snowman. Anna is a true hero to me.

Kingdom Thinking: Which song from Frozen better describes you and how you relate to the world around you? Is it the song you want it to be?