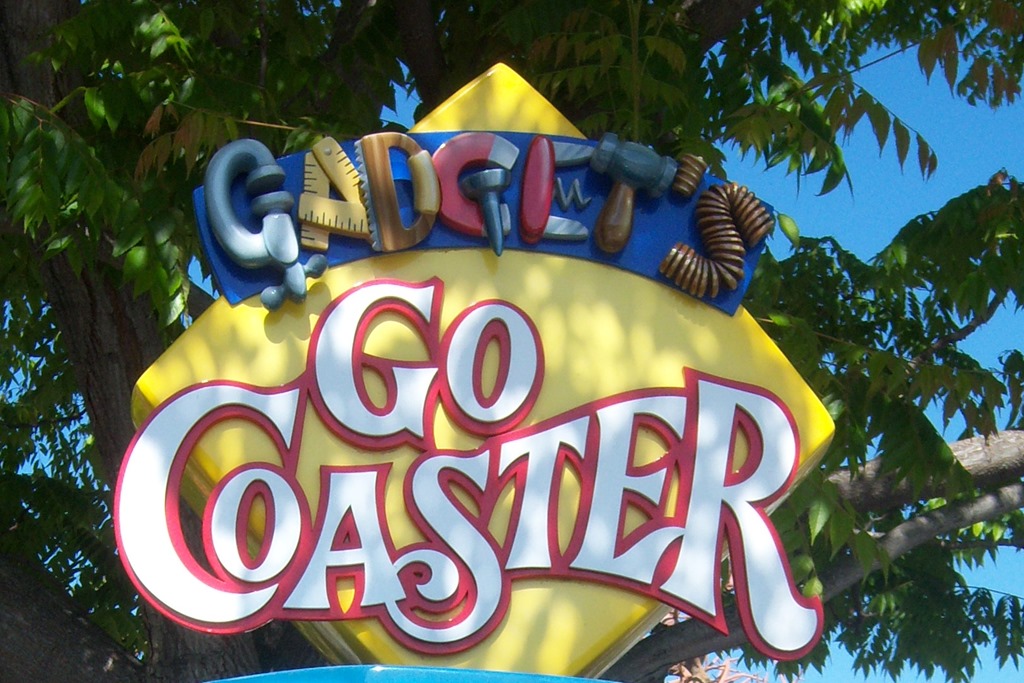 Gadget’s Go Coaster is the final remnant of the Disney Afternoon cartoon block (which included Chip ‘n Dale Rescue Rangers, Goof Troop, DuckTales, Gummi Bears, and others, depending on the season) from the 1990’s. It also has something in common with Sleeping Beauty Castle…sort of. The castle “premiered” at the park in 1955, four years before the movie was released. Conversely, Gadget’s Go Coaster opened with the rest of Mickey’s Toontown on January 23, 1993, more than two years after the final new episode aired (November 19, 1990), though reruns of episodes did continue to air until about eight months after the ride opened.

This roller coaster is named for Gadget Hackwrench, a popular character from Chip ‘n Dale Rescue Rangers, and according to the “official” story was built by her. Gadget is a pilot, mechanic, and inventor, the daughter of a deceased aviator and inventor. Adventurous, energetic, and eager to help, she’s also a bit high strung—almost always moving, thinking, and acting quickly—but highly intelligent. What makes her particularly special, though, is her ability to take discarded and unrelated items and build nearly anything with them. Of course, her inventions don’t always work out exactly the way she’d planned.

This ingenuity and inventiveness can be seen throughout the coaster she built, as Guests on this extremely short (51 second) ride pass unusual items she used to make this new invention of hers: popsicle sticks, a salvaged comb, a soup can, a pencil, a thread spool, and more. Guests ride in vehicles made of acorns, and wooden stacking blocks support the track pieces. Of course, everything is over-sized so we feel “mouse size,” like Gadget herself.

Gadget took her skills and abilities, combined them with her character and the resources she had available, and built this kid-friendly coaster. It seems to me, though, that there is one part of the ride that doesn’t fit this “built from random stuff” motif: the track itself. It’s too smooth and too uniform. Gadget did all she could, but then the Imagineers must have stepped in and helped out a bit, taking the best she could do and making it more and better.

God does the same with us. Think about the two times in the Gospels where Jesus feeds the hungry crowds (Mark 6 and Mark 8). The disciples didn’t have much to work with, but they gave Jesus what they had, and He multiplied it far beyond anything they could imagine.

God is in the business of doing more with, in, and through us than we could ever do on our own. As we are connected to Him, “rooted and established in love,” He is “able to do immeasurably more than all we ask or imagine, according to His power that is at work within us.” (Ephesians 3:14-21)

Just as Gadget did, you are called to build. To take what you have, however humble or impressive it might seem, and use our gifts, talents, skills, abilities, values, dreams, and passions to make of them what you can and offer it to God. I don’t know what that looks like in your life specifically—though we could find out together. It may be something you’ve always wanted or something you never imagined. It may involve success as the world defines it or it may center on suffering. It may feel polished and put together, or not not quite what you’d had in mind. Whatever it is, though, it will be the best possible way you could live your life, being the best possible steward of what He’s given you.

It may feel cobbled together at times, and may not always work out exactly as you’d planned. But as long as you’re being obedient and building on the foundation of Jesus Christ, you can trust the Master Builder to come alongside you, working in and through you. Then, just as the Imagineers made Gadget’s work more than she could on her own, God will make of your life something you could never be without Him.

Question: Have you held felt like you didn’t have much to offer, so you’ve held back and done little or nothing? How can Gadget inspire you to piece together whatever you do have in service to God and then trust Him to make it more? Talk about it in the comments below, or on our Facebook page.