Great Moments with Mr. Lincoln: Your Place in His Plan 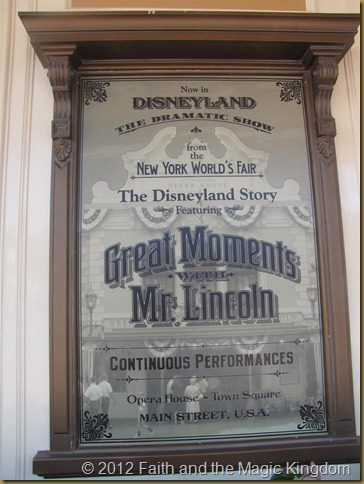 As with the Carousel of Progress and it’s a small world, Great Moments with Mr. Lincoln was introduced at the 1964-65 New York World’s Fair. It was sponsored by the State of Illinois and was the first use of a humanlike Audio Animatronic. All that the Imagineers had learned over the last several years of designing mechanical figures and developing Audio Animatronics culminated in this figure—and then carried on beyond it in Pirates of the Caribbean and more!

Originally Mr. Lincoln was planned to be part of the Hall of Presidents in the never-developed Liberty Street (and has since found a home in Liberty Square at Walt Disney World). A 1963 issue of National Geographic described it like this:

The illusion was alarming. The tall, lonely man sits in a chair much as in the Lincoln Memorial in Washington, D. C. But this is no cold stone figure; this Lincoln is “man-size”and so realistic it seems made of flesh and blood (pages 206-07).
Wathel Rogers made adjustments at an electronic console, and Lincoln’s eyes ranged the room. His tongue moved as if to moisten his lips and he cleared his throat. Then with a slight frown, he clasped the arms of his chair, stood up, and began to talk in measured tones.
“What constitutes the bulwark of our own liberty and independence?” he asked.
And then he answered: “Our reliance is in the love of liberty which God has planted in us….”
To get an idea of the tremendous animation job this is, try it yourself. Sit in an armchair and pull yourself to your feet, observing how many muscles are called into play and the subtle balance required.
The Lincoln skin is the same Du-raflex that has worked so well on the other Audio-Animatronic figures.
“Duraflex has a consistency much like human skin,” Rogers said. “It flexes as well as compresses. Rubber, for example, will flex, but won’t compress correctly for our needs.”
Rogers described the mechanics: 16 air lines to the Lincoln head, 10 air lines to the hands and wrists, 14 hydraulic lines to control the body, and two pairs of wires for every line. Rogers ran the Lincoln face through some of its 15 expressions. Lincoln smiled at me (first on one side of his face, then the other). He raised each eyebrow quizzically, one at a time, then, fixing me with a glance, frowned and chilled my marrow. And just to show he wasn’t really angry, he ended by giving me a genial wink.

Great Moments with Mr. Lincoln has changed a few times over the years, always updating the Audio Animatronic technology and at times changing the script in one way or another. The current version is my favorite, though. The script is the same one that was used from 1984 to 2001. However, Royal Dano’s voice (the actor who gives voice to Mr. Lincoln) is from a newly discovered recording that is cleaner than the original performance.

In this show Abraham Lincoln says some powerful words, but there is one portion in particular I would like to focus on for now. He says,

“…I know there is a God, and that He hates injustice and slavery. I see the storm coming. I know His hand is in it. If He has a place and work for me—and I think He has—I believe I’m ready, and with God’s help, I shall not fail.”

Can you say that? Do you see a storm coming—or already here? Does He have a place and a work for you, and do you know what it is? Are you ready?

“For it is by grace you have been saved, through faith—and this not from yourselves, it is the gift of God—not by works, so that no one can boast. For we are God’s workmanship, created in Christ Jesus to do good works, which God prepared in advance for us to do.” (Eph. 2:8-10)

What has God prepared for you to do? And how do you know? Well, one way is to really examine your heart and see what He has put on it as a burden or deep concern.

People say, “Let my heart be broken by that which breaks the heart of God.” Scott Krippayne even wrote a song called What Breaks Your Heart:

”God, what breaks your heart, what makes you cry,
What will I see if I look through your eyes?” 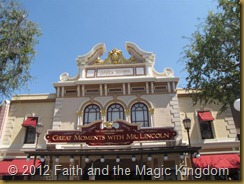 But have you ever thought about what that means? What breaks His heart? Injustice. Suffering. Sickness. Abuse. Poverty. Sin. And more. His heart breaks for anything that hurts His children or keeps people from Him.

If our hearts were broken by everything that breaks His heart, we would be catatonic all the time. We couldn’t function. But, if you are a Christian, there is something that breaks His heart which also breaks yours. Something that resonates with you and moves you beyond sympathy. For President Lincoln, it was injustice and slavery. This wasn’t a pet project of his. He knew God well enough to know that these things were wrong, and that God had placed him in that time and place to do something about it.
Question: What is it for you? And what are you doing with/about it? Talk about it in the comments below, or on our Facebook page.