Horse Drawn Streetcar: How Committed are You? 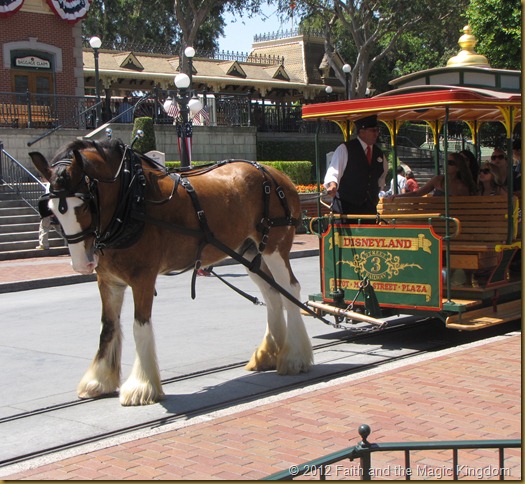 The Horse-Drawn Streetcar on Main Street U.S.A. is another attraction with an interesting history. All of the Cast Members who operate this attraction are very knowledgeable—about the horses, and about the attraction’s past. According to one I had a chance to talk with recently, there’s an exceptionally good reason for that.

Walt asked, “How much would it cost?” He was given the figure, and immediately pulled out his checkbook and wrote a check for that amount on the spot! He really wanted that attraction. This attraction also has the distinction of being one of only four attractions that Walt Disney (through his personal company Retlaw Enterprises) owned personally. The others were the Disneyland Railroad, the Monorail, and the Viewliner.

This same Cast Member told me that this is part of the reason—maybe a large part—that the Horse-Drawn Streetcar is the only “horse powered” vehicle still operating today. Originally there were two others, the Surrey and the Horse-Drawn Fire Wagon, but they have both since been retired. Only this one remains.

Walt Disney wanted this attraction in his park—and he wanted it badly enough that he was willing to pay the price himself to have it. 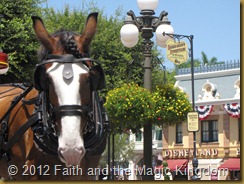 Are you willing to do that for anything, or anyone? Is there anything that means enough to you that you will sacrifice whatever it takes to have it without a moment’s hesitation? What about following Jesus? Do you have that kind of commitment to Him? It’s what He calls us to.

As they were walking along the road, a man said to him, “I will follow you wherever you go.”
Jesus replied, “Foxes have holes and birds of the air have nests, but the Son of Man has no place to lay his head.”
He said to another man, “Follow me.”
But the man replied, “Lord, first let me go and bury my father.”
Jesus said to him, “Let the dead bury their own dead, but you go and proclaim the kingdom of God.”
Still another said, “I will follow you, Lord; but first let me go back and say good-by to my family.”
Jesus replied, “No one who puts his hand to the plow and looks back is fit for service in the kingdom of God.”
~ Luke 9:57-62 (NIV)

“The kingdom of heaven is like treasure hidden in a field. When a man found it, he hid it again, and then in his joy went and sold all he had and bought that field.”
“Again, the kingdom of heaven is like a merchant looking for fine pearls. When he found one of great value, he went away and sold everything he had and bought it.”
~ Matt. 13:44-46 (NIV)

You won’t necessarily be called to sell everything or move to a foreign country (though you might). But we are all called to “put our money where our mouth is” every day. There is always something that can take the place of following Jesus. Maybe it’s your job. Maybe it’s your family. Maybe it’s fear. Maybe it’s comfort. Maybe it’s a lack of understanding who God is and how much He loves you.

But whatever it is, every day Jesus says, “Follow Me”, and every day—maybe many times a day—we make a decision. Do you want to follow Him badly enough, do you love Him enough, that you’ll do whatever it takes to follow Him, in whatever form that takes in your life?

Questions: What is your Horse-Drawn Streetcar? What do you want as badly as Walt Disney wanted that? If it’s not Jesus, what’s in His place…and why? Talk about it in the comments below, or on our Facebook page.