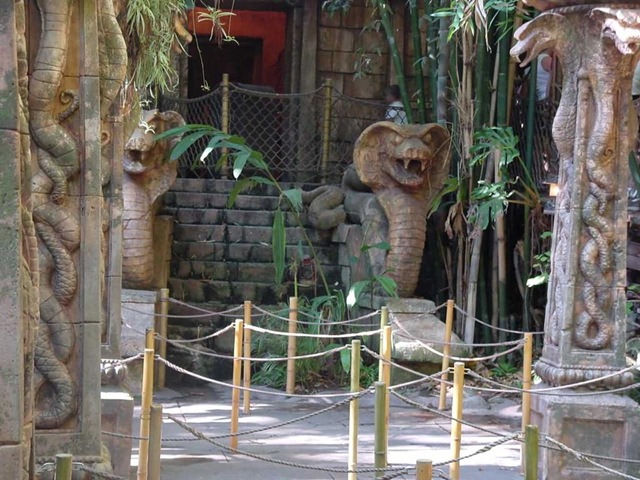 When the Indiana Jones Adventure opened in 1995 it introduced a story element never before seen in a Disney attraction: multiple, distinct experiences.

Sure, there are other attractions where you may catch part of a scene one time and a different part the next (as in Pirates of the Caribbean) or ones involving live animals that may be somewhat unpredictable. Indiana Jones was different, though. At the start of the ride, guests may be taken through one of three possible doors, under the premise of “choosing” one of the three possible “rewards.” What most guests never realize is that the three doors all lead to exactly the same track. I won’t go into detail here, though I’ll give you a hint: the track stays the same, but the doors move.

From there, computer-controlled variations created more than 150,000 possible variations (though many of these are so minor that most guests would never notice them). At the end of the ride, Sallah comes on over the intercom and makes some statement or joke connected to the door you entered.

What are you offered, depending on which door you “choose”:

They all sound appealing, don’t they? Who among us hasn’t wanted at least one of those? How much of our days do we spend trying to achieve one or more of them? Do you go to work? Make intelligent plans for the future? Put on makeup or take vitamins?

Those may not be to the degree Mara “offers,” but they’re baby-steps towards the same things. They’re not bad, though–at least not by themselves. We have to earn a living, plan ahead, and take care of our bodies, but these are magnified in Mara’s rewards. And what happens when you go through the supposedly-chosen door? First you look around at the wonders you see, but then your eyes are drawn to Mara’s face and without even intending to you “look into the eyes of the idol.” This is the one thing we were warned not to do during our trek through the temple. As soon as that happens, all hell breaks loose (more or less literally) and you are sent careening through the depths of the temple, only to escape at the last moment thanks to Dr. Jones himself.

God knew these were the areas that would trip us up the most. That’s why 1 John 2:16 (AMP) says, “For all that is in the world—the lust of the flesh [craving for sensual gratification] and the lust of the eyes [greedy longings of the mind] and the pride of life [assurance in one’s own resources or in the stability of earthly things]—these do not come from the Father but are from the world [itself].”

Interesting how well they map to our choice of doors, isn’t it?

Also interesting: no matter which we are most drawn to, they’re all really the same “door.” They all lead to the same place, the same risks, and the same way out.

In their proper place and measure, these desire are fine, but when they become more important than they should, we start to surround ourselves with them as much as we can.  We look around and fixate on them. Inevitably our eyes and hearts move from where they should be–humbly submitted to God, obedient to Him, and trusting Him–and we do the thing we must not do. We look into the eyes of the “idol.”

The idol may be the thing itself that you’re desiring. It may be a way to get that thing. It may even be yourself as you become filled with hubris and believe you can provide for yourself and don’t need God.  When that happens, life flies out of control. You’ll strive to hold it together. Others may think you’ve got it made.

But deep down, when you allow yourself to be truly honest about what’s in your heart and soul, you know it’s not working and you’re just one bad decision, rejection, or miscalculation from a complete meltdown. What kind of a life is that?

Fortunately for us, just as Indy had gone ahead of us in the attraction and rescues us at the end, so too does Jesus.

That only happens when there is a shift in perspective. By this point in the attraction we’ve had a harrowing journey, and then a light comes on Indiana Jones. He says we’re there to rescue him, but we really don’t. The boulder that’s coming at us crashes, and then we see him standing in front of it, situation under control. What changed? We took our eyes off of the treasure that drew us to the temple and to the dangers around us and focus on the one who has gone before us.

When we put these “things” back in their proper place and return the focus of our hearts, minds, and worship to God, we can be rescued. We take our eyes off the idols and put them back on Him. That doesn’t mean there aren’t still dangers around–remember, when Indy “rescues” us, we’re still in the Temple of the Forbidden Eye. We don’t have to fear, though. We know we will safely make it out, and that what remains we don’t have to face alone.

We entered the temple thinking we knew our hearts’ desires. We leave knowing how empty and dangerous they really are. Instead, we now have our true hearts’ desire: freedom, led by the One who we were truly seeking, even if we didn’t know it at first.

Question: What most easily takes your eyes off of Jesus? What is one way you can return your focus to where it belongs when that happens? Talk about it in the comments below, or on our Facebook page.