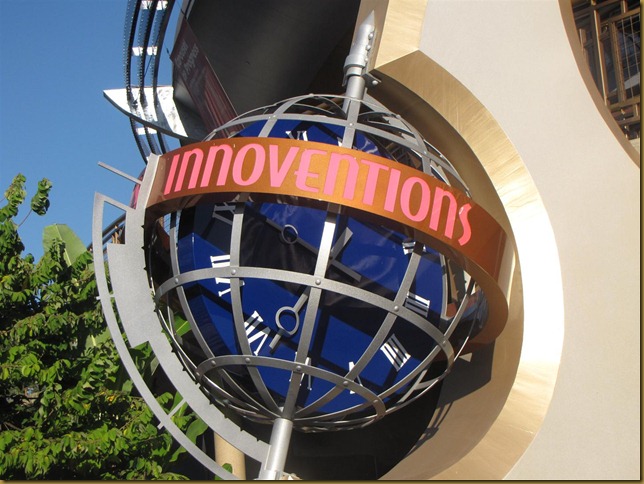 Yes, I wish we still had the Carousel of Progress or America Sings, too. OK, now that we have that out of the way…

This particular location has an interesting history. During Disneyland’s first summer, in 1955, a restaurant called the Space Bar opened at the eastern edge of Tomorrowland. The Space Bar took up a huge area there, serving basic counter-service food. They had so much room available there that in 1961 the Space Bar Dance Area opened in front of it.

The Space Bar’s days were numbered, though—in that location, anyway. In 1964, Walt Disney and his Imagineers had 4 attractions at the New York World’s Fair. One of those was a rotating theater attraction called Progressland. After the Fair ended, all of the Disney attractions were brought out to Disneyland (though not much of the Ford attraction made it), and in 1967 Progressland came to Disneyland and became the Carousel of Progress, showing four decades of American life, and with 32 Audio Animatronic figures.

Much like the Carousel of Progress was moved to Walt Disney World in 1973, Innoventions was copied/duplicated from Walt Disney World, and provided a place to showcase new technology and innovation (with varying degrees of success). 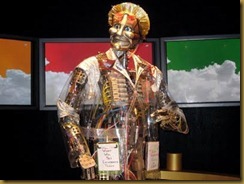 As guests prepare to enter the rotating building, we are shown a pre-show video of our host, Tom Morrow. In one of those videos, he says something that the history of this location—and Disneyland Park as a whole—proves true. “Imagining a dream and making it come true are two completely different things.”

Walt Disney had a dream, that was the start (and it was the inspiration for the Sherman Brothers song “It’s a Great Big Beautiful Tomorrow”, which was the theme song for the Carousel of Progress and is used again today with Innoventions). But having a dream wasn’t enough. It took work, dedication, time, and sacrifice to make it a reality.

The Bible doesn’t directly address having dreams and making them come true. But it does talk about having a purpose. Jesus said, “Did you not see and know that it is necessary [as a duty] for Me to be in My Father’s house and [occupied] about My Father’s business?” (Luke 2:49, AMP) Later He said these things:

“I have brought you [God the Father] glory on earth by completing the work You gave me to do.” (John 17:4, NIV)

Jesus had his purpose, He knew what it was, and He fulfilled it. We, too, have a purpose to fulfill.
“For we are God’s workmanship, created in Christ Jesus to do good works, which God prepared in advance for us to do.” (Ephesians 2:10, NIV).

God has created each of us with a unique combination of dreams & passions, gifts, skills, abilities, and interests. These combine into making us uniquely who we are and show us our purpose that we were designed to fulfill. And we have two choices:

1) Ignore or don’t seek out what that purpose is. Go through life just going with the flow, taking things as they come, and hoping for the best.
2) Take the time & effort necessary to discover your purpose. Then invest the work, dedication, time, and sacrifice necessary to develop it and live it out.

“I believe God made me for a purpose–for China. But He also made me fast! And when I run, I feel His pleasure. To give that up would be to hold Him in contempt. …to win is to honor Him…” ~ Eric Liddell (Chariots of Fire)

We bring glory to God when we know who He made us to be, and we live it out—not trying to be anyone else, but being who He made us.

“We have different gifts, according to the grace given us. If a man’s gift is prophesying, let him use it in proportion to his faith. If it is serving, let him serve; if it is teaching, let him teach; if it is encouraging, let him encourage; if it is contributing to the needs of others, let him give generously; if it is leadership, let him govern diligently; if it is showing mercy, let him do it cheerfully.” (Romans 12:6-8, NIV)

It’s easy to go through life without making the extra effort. We want to be “good Christians”. That’s a great dream. But have you moved it from a dream to becoming a reality? “Imagining a dream and making it come true are two completely different things.” It takes effort on our part, not to earn God’s favor or His love, but because He loves us. We do whatever we can to honor Him—including knowing who we are and living that out to the best of our ability—because He loves us.
Question: Do you know what your purpose is? If not, are you taking steps to find out? If so, are you living it out? Talk about it in the comments below, or on our Facebook page.