it’s a small world: The Need for Unity and a Prayer for Peace 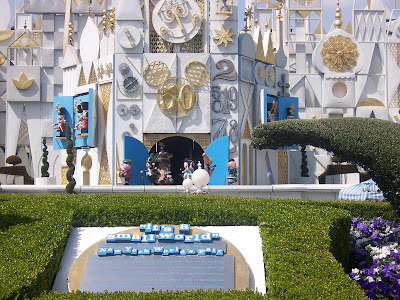 The song is already stuck in your head, isn’t it?

it’s a small world was originally conceived of and introduced as one of four attractions Walt Disney designed (or had designed by his Imagineers) for the 1964-1965 New York World’s Fair, this one for the Pepsi pavilion.

The ride was originally titled “Children of the World”. When Uncle Walt demonstrated it to songwriters Robert and Richard Sherman, the ride’s soundtrack featured numerous national anthems all playing at once, which resulted in a cacophony. Walt said, “I need one song.“In response, the Sherman Brothers wrote “it’s a small world”, a single theme song for the ride that could be easily translated into many different languages.

The Sherman Brothers’  first version of the “it’s a small world” song was played as a ballad. Walt requested something more cheerful, so the song was sped up and sung as a round. At the first presentation to Walt, the brothers performed the song while walking through a scale model of the attraction, singing and clapping their hands. Walt was delighted, and that song became the famous “it’s a small world (after all)” tune. (Thanks to the Wikipedia article for simplifying this summary for me.) 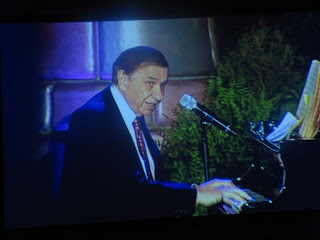 At the D23 “Destination D: Disneyland ’55” event back in September 2010, we had the privilege of hearing Richard Sherman tell us about writing the story, and even playing and singing a portion of it in that balladic form in which it was originally conceived (pictured at left). He also shared with us that when he and his brother wrote it, what they had in mind was “that it would be “a prayer for peace for the children of the world.” It may be an earworm as-is, but as a ballad it is a beautiful song. Consider the lyrics:

it’s a world of laughter,

a world or tears

its a world of hopes,

its a world of fear

that its time we’re aware

its a small, small world

There is just one moon and one golden sun

And a smile means friendship to everyone.

Though the mountains divide

And the oceans are wide 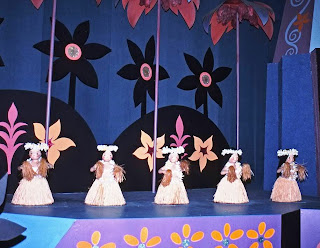 Think about what we have here. The song for this attraction was every country’s children singing their own national anthem, which resulted in a cacophony. Walt wanted “one song” to unify them. That song was a prayer for peace. Does this remind you of anything?

“You are all sons of God through faith in Christ Jesus, for all of you who were baptized into Christ have clothed yourselves with Christ. There is neither Jew nor Greek, slave nor free, male nor female, for you are all one in Christ Jesus. If you belong to Christ, then you are Abraham’s seed, and heirs according to the promise.” (Galatians 3:27-29)

“May they be brought to complete unity to let the world know that you sent Me and have loved them even as You have loved Me.” (John 17:23b)

“Blessed are the peacemakers, for they will be called sons of God.” (Matthew 5:9)

“His purpose was to create in himself one new man out of the two, thus making peace, and in this one body to reconcile both of them to God through the cross, by which he put to death their hostility. He came and preached peace to you who were far away and peace to those who were near. For through him we both have access to the Father by one Spirit.” (Ephesians 2:15b-18)

“There is one body and one Spirit—just as you were called to one hope when you were called—one Lord, one faith, one baptism; one God and Father of all, who is over all and through all and in all.” (Ephesians 4:4-6) 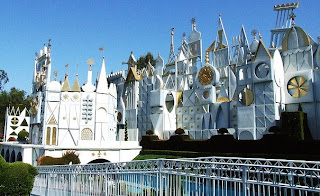 One of the consistent messages of the Gospel is our unity in Christ. Not just unity for its own sake, but unity in Jesus and through Him to draw and point people to the Father.

Much of it’s a small world highlights diversity between cultures and nations. But as long as the song they sang was their own national anthems, all hope for unity within the attraction was gone. It is only when they all sing the same song—even at the times when it is uniquely their own because they sing it in their own language part of the time—that the attraction can work.

Sure, we have differences, and that’s OK. But those differences must never be allowed to divide us. We can sing the same song with our own unique variations, as long as it is the same song! Or, “In essentials untiy; in nonessenitals liberty; in all things love [or charity].”

“it’s a small world” is a song that prays for peace for the children of the world. Our unity in Christ allows us to do the same, and we know that prayer will one day be answered. Next time this song is stuck in your head, consider it in it’s original form, and make it a prayer.