The Jungle Cruise: A True-Life Adventure 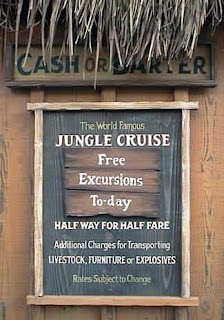 “Here is adventure. Here is romance. Here is mystery. Tropical Rivers, silently flowing into the unknown. The unbelievable splendor of exotic flowers … the eerie sounds of the jungle … with eyes that are always watching. This is Adventureland, the wonderland of nature’s own design.”


When Disneyland was in its formative stages, Walt Disney planned an area where the studio’s True-Life Adventure series of nature films could be played out right in front of the park visitors, and it was to be called, appropriately enough, True Life Adventureland.” The land was originally supposed to have real animals from Africa to inhabit a jungle river, but after zoologists told Walt the real animals would lay around, sleep, or hide, the Imagineers built Animatronic animals instead. The term “True-Life” was eventually dropped from “True-Life Adventureland.”


Consider the true-life adventures represented by the adventure that started them all, the Jungle Cruise. We get:

OK, so they’re not all true life, but they’re all based on real events and sights, just with a twist. And—while the current version and all later instances have made use of a comedic spiel—the original intent of the ride was to provide a realistic, believable voyage through the world’s jungles. The original spiel had no jokes and sounded much like the narration of a nature documentary.


Think about the ride, especially imagine (or remember) riding it as a child for the first time.

And there are some boring parts. One of the times I rode the Jungle Cruise, we had to wait before we could return to the dock. While waiting, the skipper pointed out some of the local flora to us. “There’s some. And there’s some more over there. And more over there.” That’s still one of my favorite Jungle Cruise jokes for some reason, but the truth is, nothing was happening and we were staring at shrubs.


When you get off the ride, you look back and realize it was fun. Depending on how good your perspective is, you may be enjoying it while you’re on it, but maybe not all of it, until later. And sometimes, it gets more fun in the retelling and remembering.


Like the tales portrayed in Adventureland, The Christian life is a true-life adventure.

Life is a series of emotions and experiences, a mountain after a valley, a wife to feed, a husband to clothe, children to raise, a boss to put up with, car notes, taxes, April 15th. Life is life!

Christ said, “I’ve come to give you life…..more abundant!”

For whatever else it may or many not be at any given moment, overall it’s an adventure!


What word would you use to summarize your Christian experience? Or, if you aren’t a Christian, what word do you think you would use–what word described the Christians you know?