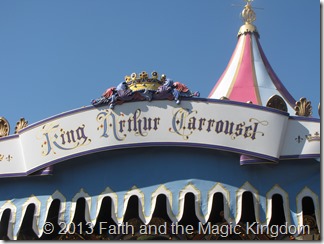 Carousels have always had an important place in Disneyland history. As Walt Disney told the story, he conceived of the idea for Disneyland while sitting a bench in Griffith Park watching his daughters ride the merry-go-round.

He felt that every park needed a carousel, and had some very specific ideas about what he wanted on his. Disneyland’s was built in 1875 by William Dentzel and had operated since 1922 at Sunnyside Amusement Park in Toronto, Ontario before being moved to Disneyland in 1954. During those months leading up to Opening Day it was refurbished, replacing some of the animals so they were all horses and adding some more, and made all 72 of them “jumpers.” On Opening Day, it sat right in the middle of the Sleeping Beauty Castle courtyard and served as the “weenie” to draw people through the castle and into Fantasyland.

The single white horse became so popular that in 1976 they were repainted so they are now all white. The other significant changes were the relocation about 20 yards north (away from the castle) in 1983 and the removal of four horses, replacing them with a bench so all guests can now ride.

King Arthur Carrousel (spelled with two “r’s” to reflect an older, British variant of the spelling) is made up of several dozen horses that are all going in the same direction. They are unique, each decorated differently and having their own name, but their individuality is less important than their equality. Every guest (except those who chose the bench) gets to ride a leaping white horse. All get an equal experience.

As Christians, we too are individuals, but when it comes to our value and our identity, our individuality is less important than our equality. That may sound like heresy to American Christians especially, but it’s true.

“So in Christ Jesus you are all children of God through faith, for all of you who were baptized into Christ have clothed yourselves with Christ. There is neither Jew nor Gentile, neither slave nor free, nor is there male and female, for you are all one in Christ Jesus. If you belong to Christ, then you are Abraham’s seed, and heirs according to the promise.” (Galatians 3:26-29)

Your identity as a child of God doesn’t come from your ancestry, your social status, your gender, or anything other than the answer to this question: “Do you belong to Christ?” If so, then you are a child of God.

Now, among the 68 leaping white horses of King Arthur Carrousel, there is still a “lead horse,” the first among its “brothers and sisters.” In this case, it’s name is Jingles, and you can identify it by gold leaf horseshoes, the flowers & references to Mary Poppins, and a few more distinctive features on the golden saddle.

In the same way, among the children of God, there is a “lead horse” if you will, the first among His brothers and sisters: Jesus Christ.

“For those God foreknew He also predestined to be conformed to the image of his Son,that He might be the firstborn among many brothers and sisters. And those He predestined, He also called; those He called, He also justified; those He justified, He also glorified. What, then, shall we say in response to these things? If God is for us, who can be against us?” (Romans 8:29-31)

You are Jesus’ brother or sister. You are an heir together with Christ. But He’s still the “lead horse” and all the rest of us are His followers. That means following Him in the way He connected to the Father, in the way He served and loved people…and in His suffering. That’s not very popular, but it’s the context for the promises in Romans 8.

Let King Arthur Carrousel stand as a reminder of your identity in Christ, not having to earn it or be better than anyone else, of your equality in Christ, and that you are a co-heir with Him—and everything that entails.

Question: Does this reminder lessen a burden on you? How can you use it or allow it to take some of the pressure off and just be who God made you to be–or maybe step up and live up to who you already are? Talk about it in the comments below, or on our Facebook page.