Twenty-five years ago, Umberto Eco described a concept called “Hyperreality.” Basically, hyperreality is the idea that a simulation is—or at least can be—more “real” than the reality itself. {Thanks to Kevin Yee for initially introducing this concept to me via the MiceAge.com site back in 2005. I’ll be sharing more insights gleaned from his fantastic articles in future posts.}

There is an episode of Gilmore Girls (don’t judge me  🙂  ) where Rory and Paris get an apartment. At one point, Rory hears a loud bang and thinks it’s gunfire. Paris tells her, “No. That was just a car backfiring. The real gunfire actually sounds fake.” Rory had gotten so used to hearing fake gunfire on TV that the sound of it was more real to her than the sound of actual gunfire. The fake sound had become a hyperreal sound.

And why not? It has almost everything we would expect Main Street to have. It has a bakery, a town hall, a bank, a fire station, a penny arcade, a barbershop, clothing shops, a photo supply company, even a cinema. It has happy, gracious people working on it, giving it something of that “small town charm”. It has various modes of transportation—an omnibus, a horse drawn streetcar, a horseless carriage, even a fire engine. All moving smoothly and efficiently down the center of the street, reinforcing the vision that all is as it should be in this quaint, rustic place.

Most of us have never seen a turn-of-the-twentieth-century American small town. But we have seen Main Street U.S.A. It becomes our hyperreal version of the actual reality. And so what we expect to be true carries more weight than what the so-called real world shows us.

In some ways, this concept is a good description of what biblical faith means. The difference is that instead of a false reality being more real than actual reality, faith tells us that what we believe by faith to be true is more real, has more substance, than what we can see, hear, and feel. 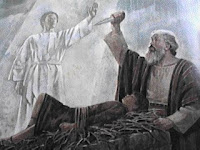 In Genesis 22 tells of the time God tested Abraham. He was told to take his son, Isaac and sacrifice him as a burnt offering to God. Abraham did as he was told. Of course, God stopped him at the last minute, saying, “Do not lay your hand on the lad or do anything to him; for now I know that you fear and revere God, since you have not held back from Me or begrudged giving Me your son, your only son.”

When Abraham stepped out on faith, he did so because he had a reality that he knew was more real than what he could see around him. He knew that God was faithful, no matter what it seemed like at the moment. That’s why he says things like, “We will worship and then we will come back to you.” to one of the servants. Notice he doesn’t say, I will come back,” he says “we will”.  When Isaac asks, “… but where is the lamb for the burnt offering?” Abraham answered, “God himself will provide the lamb for the burnt offering, my son.” All Abraham knew was that God had promised that he would have many descendants, these descendants would come through his son Isaac, and that God is faithful to keep his word. So Abraham acted in faith.

Right here, on Main Street U.S.A., we get a reminder that what we see around us is not all there is, that there is much more that can be grasped only through faith.