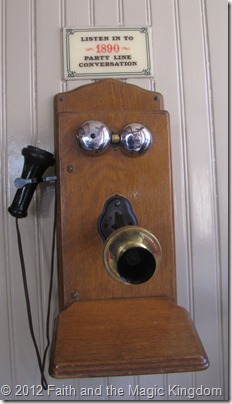 One of those often-overlooked gems at Disneyland are these phones hanging on the walls in the Market House on Main Street U.S.A. Most guests think of them as just decorative props—if they notice them at all-but there’s more to them than that.

Pick one up and you get to listen in on a “party line” conversation. There have been two recordings over the years, and the current one actually has two parts that loop into each other. My favorite part is the second half of the conversation, where Mrs. Thelma Bird calls Quentin Spoon, Fire Chief, to report her barn being on fire.

Mrs. Thelma Bird: Hello? Oh, thank goodness! I want to report a fire! My barn is burning, and there’s lots of smoke, and I can see the flames coming through the door! Please, come quick!

Quentin Spoon: A fire, did you say? Well, then you’ll need to speak to the Fire Chief.

Mrs. Thelma Bird: Who are you?

Mrs. Thelma Bird: But I thought, I rang the fire station…

Quentin Spoon: This is a fire station, and the post office, and the general store..

Mrs. Thelma Bird: I need the Fire Chief, my barn is burning down!

(more sounds of the fire, and a donkey braying)

Quentin Spoon: Yep, a fella’s gotta wear many hats in this town.

Mrs. Thelma Bird: Why didn’t you say so?

Quentin Spoon: I had to get my Fire Chief’s hat! Ain’t official without it!

Mrs. Thelma Bird: Now can we please get back to my barn?

Gertrude Anderson: Thelma Bird! You can show a little more respect to our dear Quentin Spoon!

Mrs. Thelma Bird: Who is this? Gertrude? Gertrude Anderson? You get off this line right now!

Quentin Spoon: Now what can I do for you, Gertrude?

Gertrude Anderson: Well, Quentin, I just wanted to know if my package of peacock feathers has arrived yet.

Quentin Spoon: Oooh, sounds like this call is for my postmaster’s hat. Be right back!

Mrs. Thelma Bird: Wait! Gertude, get off the line! This is an emergency!

Gertrude Anderson: Hmmph! And I suppose my missing package of peacock feathers is NOT an emergency?!

Gertrude Anderson: Well!! I never!! You’d think her house was burning down!

Mrs. Thelma Bird: Now! Can we get back to the fire?

Quentin Spoon: Oh, don’t worry, Mrs. Ird. We’ll have a fire truck out there in no time.

Quentin Spoon: What? Are you telling me there’s no fire?

Mrs. Thelma Bird: No, no fire.

Mrs. Thelma Bird: There is nothing left to put out. Good day, Mr. Spoon.

(hangs up the phone)

Quentin Spoon had to wear a lot of hats, and he insisted on doing so, literally. His job was to serve the town, as the Post Master, the Fire Chief, and whatever else he may have been. But he was very concerned with his position, too. He was so concerned about his positions that a woman’s barn burned down while he was busy making sure things were proper and that he was exercising his proper authority.

He wasn’t being intentionally malicious or destructive about what he was doing, but he was so preoccupied with who he was, what he was supposed to be doing, and making sure he was in the right position that he forgot to serve.

That’s pretty normal, but it can also be just as destructive. Paul says in Ephesians and in 1 Corinthians that we are all part of the Body of Christ, and we all have a role to play in it. We shouldn’t think less of others who aren’t like us or think less of ourselves because we wish we were more like someone else. Yet at the same time, our purpose in having that role isn’t for ourselves.

“And in the church God has appointed first of all apostles, second prophets, third teachers, then workers of miracles, also those having gifts of healing,those able to help others, those with gifts of administration, and those speaking in different kinds of tongues.…It was He who gave some to be apostles, some to be prophets, some to be evangelists, and some to be pastors and teachers, to prepare God’s people for works of service, so that the body of Christ may be built up.”

The purpose of our role, of our gifts, is to serve others. It would be easy to say, “Oh, I’m a teacher, I don’t do Communion preparation,” or “I’m an evangelist, I don’t do homeless ministry,” or whatever.

Don’t let a house burn down while you’re putting on the right hat…or claiming someone else is wearing that hat instead.

Question: When have you been nudged to do something that you didn’t think was “your thing” and were blessed by serving in that way? Talk about it in the comments below, or on our Facebook page.