The Matterhorn: Choosing Fantasy or the Future 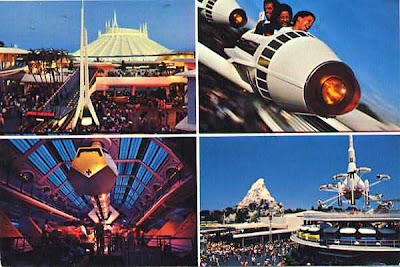 “Tomorrowland. A vista into a world of wondrous ideas, signifying man’s achievement. A step into the future, with predictions of constructive things to come.” (from Walt Disney’s dedication speech)

When the general outlook of people is positive, science fiction is popular. When that outlook is negative, fantasy is popular. Looking to the future—even a fictional one—means embracing change. Looking to fantasy means clinging to the way you perceive things to be, and being unwilling to change. 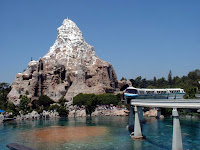 The Matterhorn stands at that point of decision. Hope and looking to the future, or retreat into the perceived safety of fantasy. It is the only current ride that straddles two lands (There were four Autopias, but each was an entirely separate attraction, so that doesn’t count). Interestingly, the only other ride to exist in two lands covered the same two lands—the Magic Skyway.


On the Fantasyland side of the Matterhorn, there are a lot of curves. Twisting and turning back on itself. But very few surprises. Only a couple of small dips, and no real drops. It’s the smoothest and feels slowest of the two tracks.
The Tomorrowland side has fewer curves, but more dips, and even a couple of respectable drops. It’s the rougher of the two tracks, and it feels faster (though there is really no difference in speed on average).

In much the same way, the choices between fantasy and the future are the choice between a perception of safety and security versus a perception of greater risk. But the truth is, both are risky in their own way. Clinging to perceived safety means not stepping out, not growing, not progressing and becoming the person God made you to be. It means a life half-lived. Moving into the future means risking change, even possible failure. But it also means growing into the person God designed you to be. A life fully lived.

Read Hebrews 11 and notice how often faith is connected with action verbs.

Of course, there are times to “wait on the Lord”, but that’s different from just playing it safe, clinging to the illusion of safety, refusing to follow Jesus out of a fear of risk. Sometimes it means persevering. Sometimes it means sacrificing our own plans. Always it means trusting that “… we know that in all things God works for the good of those who love Him, who have been called according to His purpose.” (Rom. 8:28)

Which do you choose? Fantasy or the future? Perceived safety or risking in faith?