I have written before about the Matterhorn, and its unique placement at Disneyland. This time we’re going to look at not only where it is, but what was there before.

In 1954, when the moat for Sleeping Beauty Castle was being excavated, the dirt was piled up behind the castle. Removing the dirt from the site would have been too expensive, so Walt Disney had a fence built around it, and it was called “Holiday Hill”. At first, it was mostly just the dirt, but that would get blown around during windstorms, so Bill Evans’ grounds keeping team landscaped it with some shrubs & sod to hold the dirt in place. The picture above shows it in that condition, with some additional improvements.

When the Magic Skyway was being built, the hill became the location of a large steel support tower. It did the job, but it was something of an eyesore. So Walt talked about some possibilities with Admiral Joe Fowler (the man Fowler’s Harbor at Disneyland was named after), and eventually—through a series of events that may be the subject of a future post—the Matterhorn, the first tubular steel continuous track roller coaster in the world, was born.

What started as dirt in an unwanted place turned into a large mound of dirt, which became a landscaped mound of dirt—and briefly a lookout point, then part of a support system for another attraction, to finally a landmark attraction of its own—one of the very first E-ticket attractions! It started with little to no value, and over time, with work and getting a purpose, became something of incredible value. 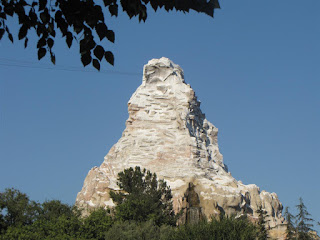 What do we call it when something that has little to no intrinsic value is given worth? Think of a coupon. A little piece of paper that by itself is worth nothing, but can become worth money—sometimes a lot of money. What is that process called? Redemption.

We redeem a coupon. We redeem wasted time to make it useful. The mound of dirt that was Holiday Hill was redeemed (through a process) to become a landmark attraction. And through Christ our lives are redeemed.

For you know that it was not with perishable things such as silver or gold that you were redeemed from the empty way of life handed down to you from your forefathers, but with the precious blood of Christ, a lamb without blemish or defect.
(1 Peter 1:18-19, NIV)

For He has rescued us from the dominion of darkness and brought us into the kingdom of the Son He loves, in whom we have redemption, the forgiveness of sins.
(Col. 1:13-14, NIV)

All that we are, we are because God made us that way. He gives us meaning, purpose, salvation, and eternal life. In order to truly make a difference, to live a life that matters, to not just be rats in a maze, requires that we first are redeemed by God. That redemption is what takes our lives and gives them real value. You have value because you are God’s child, “…a chosen people, a royal priesthood, a holy nation, a people belonging to God, that you may declare the praises of him who called you out of darkness into his wonderful light.” (1 Peter 2:9) That is your value, and it comes from God. And how much more valuable could you ever want to or hope to be?

Just as it was a process to go from the dirt in front of the castle to Holiday Hill to the Matterhorn, so our being redeemed is a process. In 1 Corinthians 1:18, Paul says, “For the message of the cross is foolishness to those who are perishing, but to us who are being saved it is the power of God.”

Did you see it? “…to us who are being saved…”. It’s a process. And no matter where you are in that process, God won’t quit. He won’t give up on you. In fact, “…He who began a good work in you will carry it on to completion until the day of Christ Jesus.” (Phil 1:6)

You may think you’re just a mound of dirt, but if you are a child of God, you have value because you have been redeemed. He is shaping you into something special. Live out that new life of value, not to earn God’s favor, but because you have it!


Question: What is one way you’ve seen that God has redeemed something in your life?