The Monorail: Growing Up or Along for the Ride? 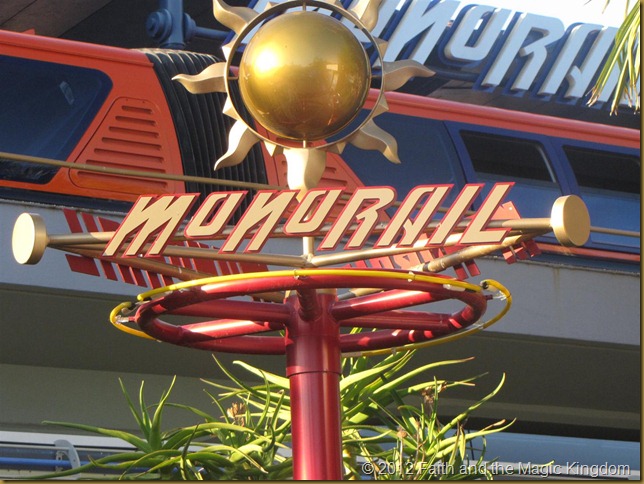 The Disneyland-Alweg Monorail opened June 14, 1959, part of what is unofficially called Disneyland’s Second Grand Opening. It has it’s unusual hyphenated name because the monorail-on-an-elevated track was actually invented by Dr. Axel Lennart Wenner-Gren (whose initials spell “Alweg” (mostly)). Walt Disney saw it on a test track in Germany and partnered with Alweg to create a more “futuristic” version of it for Disneyland.

Bob Gurr, John Hench, Roger Broggie, and Bill Martin all had a significant role in the developing and building of the Monorail for Disneyland. For all of them—Walt included—the goal wasn’t to create simply a fun ride, but a new concept in transportation, much as the PeopleMover was later to be. It didn’t start out that way, though.

From when it opened until 1961, the Monorail was on a closed-loop that started and ended in Tomorrowland. Only when the track was expanded to include a stop at the Disneyland Hotel did it become anything resembling actual transportation. From that point on, if you wanted to take the Monorail to actually go somewhere, you could. Of course, today that stop is in Downtown Disney, but the concept still remains true.

For regular visitors to Walt Disney World who come to Disneyland for the first time, this is one of the differences that surprises them the most. In Florida, the Monorail actually is transportation. It covers several miles of track, with stops at 2 theme parks, 3 hotels, and the Transportation and Ticket Center. In  fact, none of the stations are inside theme parks, so guests can ride without having to have paid for admission to any of the parks. The Florida property is so expansive that the Monorail is needed as transportation. When they come out here and see “ours” has only 2 stops, 1 is in Disneyland itself, and other than that it doesn’t really go anywhere, they are usually perplexed.

Many Christians view their faith the same way. There is little thought to “going somewhere” in their Christian walk, and even less action. We go along for the ride passively, maybe going to church on Sunday morning, praying briefly before a meal, and that’s about it. Our faith doesn’t really impact our daily lives, and certainly not in a way that shows growth or forward progress.

The writer of Hebrews witnessed the same thing in his day. He said to his readers,

“We have much to say about this, but it is hard to explain because you are slow to learn. In fact, though by this time you ought to be teachers, you need someone to teach you the elementary truths of God’s word all over again. You need milk, not solid food! Anyone who lives on milk, being still an infant, is not acquainted with the teaching about righteousness. But solid food is for the mature, who by constant use have trained themselves to distinguish good from evil.”

There’s a no-so-subtle reprimand here that they were still the way they were at the start in their spiritual growth. They still needed the basics and needed to be taught, instead of learning the deeper truths and teaching others. They were just along for the ride.

What about you? Are you growing in Christ, and in knowledge, understanding, and unity? Are you growing in your service (which doesn’t necessarily mean more time spent)? Do you have a plan to make that growth consistent and intentional? Or are you just riding along, wondering why your faith doesn’t seem to make much of a difference in your life?

“It was he who gave some to be apostles, some to be prophets, some to be evangelists, and some to be pastors and teachers, to prepare God’s people for works of service, so that the body of Christ may be built up until we all reach unity in the faith and in the knowledge of the Son of God and become mature, attaining to the whole measure of the fullness of Christ.
Then we will no longer be infants, tossed back and forth by the waves, and blown here and there by every wind of teaching and by the cunning and craftiness of men in their deceitful scheming. Instead, speaking the truth in love, we will in all things grow up into him who is the Head, that is, Christ.” (Eph. 4:11-15)

Question: Are you growing in your faith, or are you just along for the ride? Talk about it in the comments below, or on our Facebook page.