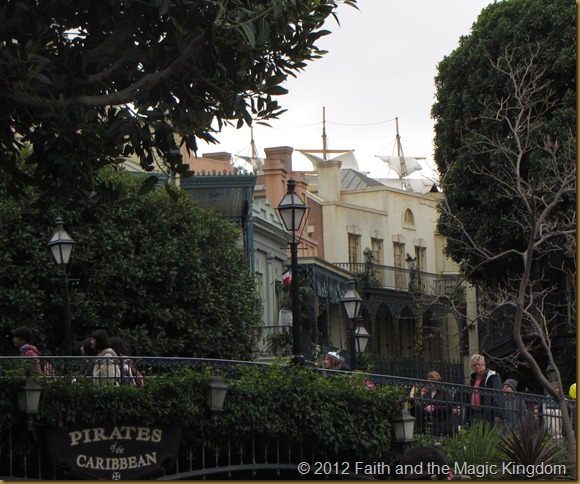 Today we look not at an attraction, not at a land, but a hidden detail…you could even call it a “hidden treasure”.

When you’re walking through New Orleans Square, have you ever noticed the masts of the ships in the harbor? No? That’s OK, most people haven’t. But if you’re walking from Frontierland toward Pirates of the Caribbean, just after you pass the River Belle Terrace, start looking up behind the buildings. You’ll see masts of ships back behind them, like you see in the picture at the top of this post. They seem so obvious…if you know where and when to look.

Why are they there? Story, of course. When you’re in this area, think about exactly where you are. You’re in “New Orleans”, with the “Mississippi River” behind you. What would be on the other side of the city (simplifying the geography just a bit)? The Gulf of Mexico. Here you see ships docked in the city’s port, ready to set sail into the Gulf of Mexico, and eventually the Atlantic Ocean.

They didn’t have to put these sails there. I’ve heard any number of utilitarian reasons they are. Whatever the practical reasons may be (if any), they didn’t have to theme them like this. But they did. Even if most people never see them, they subliminally set the scene. They remind you where you are so that it feels even more real. And yet as they sit behind the buildings, just over the horizon (so to speak), they remain hidden from many, just as many of the special, intricate details do. 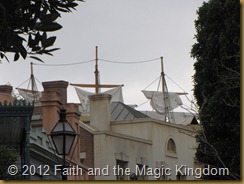 Sometimes God’s provision is just the same way. He may start to answer our prayers long before we ever see the answer—maybe even before we ask. But we have to continue to follow and obey until we’re in just the right place for Him to reveal it— and for us to receive it. Think about when God told Abraham to sacrifice his only son, Isaac. (Genesis 22)

Here is the main part of the story:

Then God said, ‘Take your son, your only son, Isaac, whom you love, and go to the region of Moriah. Sacrifice him there as a burnt offering on one of the mountains I will tell you about.’
Early the next morning Abraham got up and saddled his donkey. He took with him two of his servants and his son Isaac. When he had cut enough wood for the burnt offering, he set out for the place God had told him about. On the third day Abraham looked up and saw the place in the distance. He said to his servants, ‘Stay here with the donkey while I and the boy go over there. We will worship and then we will come back to you.’
Abraham took the wood for the burnt offering and placed it on his son Isaac, and he himself carried the fire and the knife. As the two of them went on together, Isaac spoke up and said to his father Abraham, ‘Father?’
‘Yes, my son?’ Abraham replied.
‘The fire and wood are here,’ Isaac said, ‘but where is the lamb for the burnt offering?’
Abraham answered, ‘God himself will provide the lamb for the burnt offering, my son.’ And the two of them went on together.
When they reached the place God had told him about, Abraham built an altar there and arranged the wood on it. He bound his son Isaac and laid him on the altar, on top of the wood. Then he reached out his hand and took the knife to slay his son. But the angel of the LORD called out to him from heaven, ‘Abraham! Abraham!’
‘Here I am,’ he replied.
‘Do not lay a hand on the boy,’ he said. ‘Do not do anything to him. Now I know that you fear God, because you have not withheld from me your son, your only son.’
Abraham looked up and there in a thicket he saw a ram caught by its horns. He went over and took the ram and sacrificed it as a burnt offering instead of his son. So Abraham called that place The LORD Will Provide. And to this day it is said, ‘On the mountain of the LORD it will be provided.’

While Abraham was obeying, God was providing the answer to his prayer that somehow he wouldn’t lose his only son. But Abraham couldn’t see the answer until the moment it was needed (which I’m sure was well past the time he would have liked to have seen it). God provided, but “over the horizon”, in a way and a place that Abraham couldn’t see. All he could do was trust God.

Abraham didn’t know what was going to happen, and what he had to do seemed absurd, but he did it anyway, because he trusted that God could somehow keep his promise. as the writer of Hebrews says, “By faith Abraham, when God tested him, offered Isaac as a sacrifice. He who had received the promises was about to sacrifice his one and only son, even though God had said to him, ‘It is through Isaac that your offspringwill be reckoned.’ Abraham reasoned that God could raise the dead, and figuratively speaking, he did receive Isaac back from death.” (Hebrews 11:17-19, NIV)

Sometimes God calls us to step out in faith, not knowing how what we’re doing makes any sense at all—or any difference. We may be uncomfortable, or even afraid. But God is faithful. Or we may be caught in the middle of circumstances we don’t understand. They’re painful and it seems hopeless to even wish for a way out. But God is faithful. He is preparing the answer to your prayer even as you pray it, but you will not see it unless you continue in faith and obedience. Only when He is ready will you look up and see the answer to your prayer, caught in the bushes or just over the horizon.

Question: When have you seen God’s provision appear from “just over the horizon” even though you couldn’t see it before it came (in your life or someone you know)? Talk about it in the comments below, or on our Facebook page.