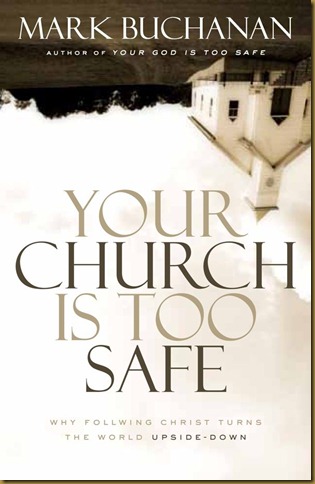 A couple of weeks ago, my friend Mark Taft posted a blog about the book Your Church is too Safe by Mark Buchanan. Now, I haven’t read the book yet (though I will), but the excerpt he posted from it caught my attention immediately. It says,

“At some point, we stopped calling Christians disciples and started calling them believers. A disciple is one who follows and imitates Jesus…until his Word and his world reshapes hers, redefine her, change inside out how she sees and thinks and dreams and, finally lives. A believer, not so. She holds certain beliefs…but in her most honest moments she wonders why they have much such a scant difference…
“You can’t be a disciple without being a believer. But—here’s the rub—you can be a believer and not a disciple….The kingdom [of God] is full of disciples, but our churches are filled with believers.”

At the time the New Testament was written, that wasn’t true. The disciples were also called “believers” (see Acts 2:44 and 1 Timothy 4:12, among others), though this term is less commonly used than “disciple” (much less so than the NIV makes it appear). But the reality is that “believer” meant something different then than it does now.

We have diluted what “faith” or “belief” means. Faith implied action, and it still should. James focuses on that truth. If I say I believe you’ll catch me if I fall, then I must be willing to risk falling.  A “leap of faith” is only that if there are both parts: faith and a leap.  If I say I believe in Jesus, that must be more than intellectual assent.

Yet intellectual—or sometimes emotional—assent is what belief has become for many Christians. That’s why it can be true that 90%+ of  Americans say they “believe in God”, yet nowhere near 90% of them (us) live like it.

There’s no way to get around the word “disciple”. It’s clear. It’s direct. It demands action. Not out of fear or obligation or to earn “brownie points”, it’s just the nature of the word. Discipleship follows love, gratitude, and a recognition of what the Lord has done for me.

It’s not done to ear favor, love, or salvation. Discipleship comes when we receive those gifts and say, “I want my life to become a reflection of the One who gave Himself for me. Because of what He has done for me, and who He is, I will follow Him—wherever and whenever that may lead.” If I say I am a disciple of Jesus, then (as Mark Buchanan says) I must allow Him to reshape me. I must trust Him for my future. I must grow in Him, through His strength and grace.

Belief, as it has come to be defined today, is weak and helpless. It has no power. It has no life. Discipleship is challenging and risky. It connects us to our Creator—and to His love and power. To be a disciple is true life.

Question: Which are you? Are you a “believer” or a “disciple”? Talk about it in the comments below, or on our Facebook page.