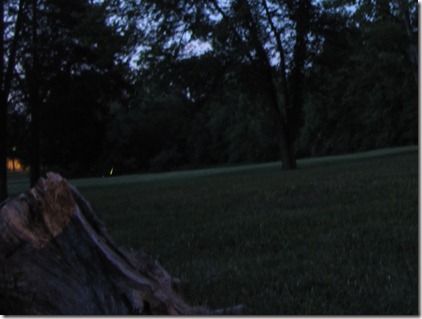 We love to see the wonder in a child’s eyes when he sees a field of fireflies for the first time. But what about when an adult sees them? That was me just a couple of months ago.

I was in Franklin, TN for the 48Days Coaching with Excellence event. The night I arrived, I decided to walk up the road a bit to the Steak ‘N’ Shake for dinner just after sunset. I was tired, I was very hungry, and I’d never eaten there before, so it seemed like a good choice.

On my way to the restaurant, I passed a small field and little flashes of yellow light caught my eye. There were at least two dozen fireflies flitting through the air, their lights merrily blinking on and off. I was captivated. Never before had I actually seen a firefly in real life. Southern California city boys just don’t see that kind of thing.

I stood there and watched as long as I could, but eventually hunger took over and I had to go get my food—to go, so I could watch them some more on the way back to my motel room.

After I ate, I had to go back out and get some pictures of them. I knew it would be difficult to try to photograph tiny, erratic points of light, but I needed to try. So I went back out to the field and…nothing. There were lights coming from the nearby buildings, but the field that had glowed before was empty.

I tried again the next night, and saw nothing. Some research revealed that fireflies come out mainly at sunset, so night #2 I was too late by a couple of hours. I also learned that the night before was the very first night the fireflies had been seen this season.

The third and final night I was determined to see them again, and to get at least one picture. I spent an hour or more trying to find them, and when I did, I tried to find more. I took photo after photo of not much. and eventually gave up, forcing myself to be content with what I had, and to hold to the memory of that first night, where memory was all I had. The photo above is the best I got, and it’s not much.

I find myself doing the same thing in other ways, too. I get a glimpse of something new or exciting, and I chase it. Just as chasing fireflies at the wrong time of night and so early in the season frustrated me, so chasing opportunities, relationships, and adventures. They’re out there, but I want them now, and I get frustrated when I don’t get them now.

It’s hard for me to wait, but sometimes that’s exactly what I have to do. In some cases, I can be working to lay a foundation, increase my preparation, or develop in some area. Other times, I just have to wait. There’s nothing else I can do.

Sometimes God says, “The world doesn’t depend on you. It depends on Me. I am God. You’re not. So just stop and let Me do what needs to be done. Trust Me, and when the time is right, I’ll let you know.”

The fireflies will be there, but I can’t make them come on my schedule or to where I want them to be.

Question: Do you ever try to rush things in your own life? What is one way you can switch from chasing to trusting? Talk about it in the comments below, or onour Facebook page.