(Note: I originally posted this on Babes in Disneyland, where I am a Contributor. I wanted to share it with my regular readers who may not also read that blog…though if you don’t, I encourage you to!)

Walt Disney got his start with theatrical animated shorts, and later moved into animated features. He was a story-man, with his heritage in the movies. The  Walt Disney Company’s DNA is storytelling on the silver screen. It may come as no surprise, then, that Disneyland itself welcomes you into the world of living, immersive stories with a subtle nod to the movies.
Think about entering Disneyland Park. Have you ever looked down after you stepped through the gates? You’re walking on red stone/pavement. This is your red carpet arrival. What’s to come is still veiled, hidden behind the train station and the berm it sits on, but you have arrived.
As you pass through the archway (where you get the “Coming Attractions” posters) and into Town Square, what’s the first smell you notice? For most people, it’s popcorn. What could be more reminiscent of the movie theater?
Follow Main Street and round the corner just past the flag pole. Suddenly, the curtain rises and you see the “title card” of this living film, Sleeping Beauty Castle. The film is rolling and the movie has started. But what happens on screen before the action begins? The opening credits, of course! 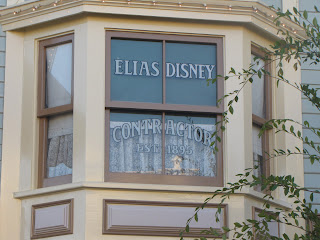 Have you ever looked up as you walk down Main Street U.S.A.? The second floor windows are a tribute to many of the people who had a hand in the creation or development of Disneyland—and a special nod to Walt’s father, Elias Disney. Only after you have passed these honors, after the opening credits have rolled by, do you finally enter the movie—though of course at Disneyland you get to choose your film after the credits rather than before. A fantasy, fairy tale film? A sci-fi futuristic story? An adventure through unknown lands? A romp through the Western Frontier? All these and more are now merely steps away.
At the end of the day, the same Main Street U.S.A. windows serve as the closing credits, and stepping through the tunnel now closes the curtain. Your day of living the stories come to life is at an end…for now.
For you to discover: Believe it or not, in Disneyland Park, Walt Disney does not have a window on Main Street. Do you know where his window is?