Off-Topic Thursday: On Settling and Missing Out 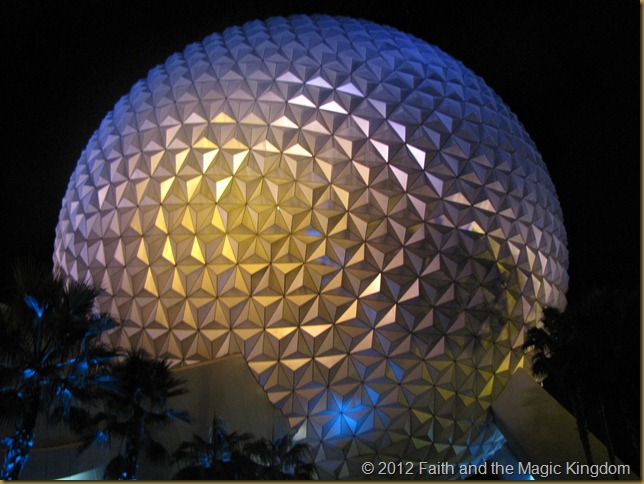 If you’ve ever been to Epcot, or seen pictures of it, you’re familiar with Spaceship Earth. It’s the giant “golf ball” (technically a geodesic sphere), and it sits basically right at the front of the park.

I heard a story recently of a couple who visited Epcot. As they were leaving—not too long after Epcot opened—the person telling me the story overheard the man say to the woman, “I can’t believe we came all this way just for one ride in the big ball! Disneyworld is lame!” Yes, they had somehow come to the conclusion that Walt Disney World—or at least Epcot—consisted only of Spaceship Earth.

That’s really sad (and kind of scary). Walt Disney World is 40+ square miles (twice the size of the island of Manhattan), with 4 theme parks, 2 water parks, Downtown Disney, 26 resort hotels owned by Disney (plus a few more owned by outside companies).

Just looking at Epcot, there are two main areas—Future World and World Showcase. Future World has several world-class attractions, including Mission: Space, Test Track, Soarin’, Living with the Land, Innoventions, Journey Into Your Imagination with Figment, and more (including Spaceship Earth, of course).

World Showcase features 11 different countries, with food, architecture, attractions, and Cast Members from those countries. At night, Illuminations takes place in World Showcase Lagoon. Depending on what time of year you’re there, you might experience the International Food and Wine Festival, Flower and Garden Festival, or Holidays Around the World (including Candlelight Processional). And this doesn’t even touch on the entertainment or food options in either part.

To think, all of that was missed, because this couple thought that this one easy-to-see attraction is all there was! I don’t know why they thought this. Clearly they didn’t pick up a park map or do any research at all. They didn’t talk to anyone before their trip and get planning or touring help (from a travel agent or anyone else), and they didn’t talk to anyone while they were there to see if they were missing something.

This is really sad to me. But I also have to be honest and confess that I’ve done the same thing—on a smaller scale, to be sure, but basically it was the same mistake. The first time I went to the Renaissance Faire, it took me about 3 hours to see everything I thought there was to see and do. Unfortunately (?) my friends—who had gone off on their own after we arrived—wanted to stay until the Faire closed, about 2 1/2 hours later, so I sat on a bench for 2 hours waiting for them.

In the last half hour, I happened to notice some people had maps of the Faire, so I found out where they were and picked one up. As it happens, there was another whole section I had missed. I’d seen maybe 2/3 of the Faire, but had missed the rest, because I didn’t even know it was there. I sprinted over to that section and tried to take it all in during the few minutes I had left—and almost all of my favorite booths and games turned out to be in that section. You can be sure I didn’t make that mistake again!

Has that ever happened to you? You experience what you think is “all there is”, and then find out at the last minute, or after the fact, that there is so much more?

I’ve heard of it happening at Walt Disney World. I’ve seen it happen at Disneyland. I’ve done it myself other places. And I’ve seen it (and done it) in life, and I suspect you have, too. C. S. Lewis said,

“If there lurks in most modern minds the notion that to desire our own good and earnestly to hope for the enjoyment of it is a bad thing, I submit that this notion has crept in from Kant and the Stoics and is no part of the Christian faith. Indeed, if we consider the unblushing promises of reward and the staggering nature of the rewards promised in the Gospels, it would seem that our Lord finds our desires, not too strong, but too weak. We are half-hearted creatures, fooling about with drink and sex and ambition when infinite joy is offered us, like an ignorant child who wants to go on making mud pies in a slum because he cannot imagine what is meant by the offer of a holiday at the sea. We are far too easily pleased.”

Question: What have you missed out on, only to find out later it was there and available for you to experience and enjoy? Talk about it in the comments below, or on our Facebook page.