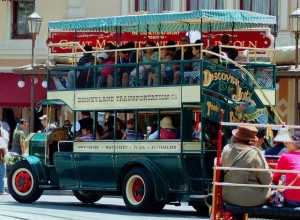 On Disneyland’s Opening Day, all the vehicles on Main Street U.S.A. had “natural” horsepower. The horse-drawn fire wagon, surrey, and street car.

Only the last one continues to operate today. In place of the others are three “newfangled” vehicles. The red horseless carriage entered service on May 12, 1956, and a yellow one joined it in December. Summer of 1956 saw the addition of the omnibus (the green double-decker bus) and August of 1958 added the last of the motorized vehicles, the fire truck. As of today, the vehicles in operation are the same ones from the 1950’s (with some replacement parts, I’m sure), so if you want to touch a bit of history, give these a ride next time you need to get from one end of Main Street U.S.A. to the other.

The Horse Drawn Streetcar got its own entry here on Faith and the Magic Kingdom. The motorized vehicles get a miniseries. Consider the three different vehicles and the purposes they traditionally serve:

You’ve probably heard that there are three kinds of people in the world (or four, or two, or whatever). In fact, here are some of my favorite ways to distinguish between people.

“There are 10 kinds of people in the world: those who understand binary and those who don’t.”

“There are 2 kinds people in the world: Those who can extrapolate from incomplete data”

Here’s another way: The Omnibus, Fire Truck, and Horseless Carriage provide a great vehicle (so to speak) to describe three approaches to being a Christian. Beginning today and for the next two weeks, we’ll look at one each week.

Modeled after the large busses used for tours of Manhattan in the 1930’s, the Omnibus is a purely recreational vehicle. Guests ride to see the sights—and in some cases, to be seen. It provides a different perspective on Main Street, especially the upper deck of the bus, but with no practical application at the time. No matter what you see, you can’t go in a store, stop to admire a window, or get some ice cream.

Tourist Christians are the same way. Their question is “What’s in it for me?” If they do anything at all, it’s to be seen by others and get recognition from people. Mostly, though, they just want to go along for the ride. They come to church only to feel good, serve when they’ll get applause, and leave if things get too hard. They claim to be followers of Christ, but it makes no practical difference in their lives, especially if that difference might involve suffering, sacrifice, or challenge. They prefer to just ride along “above it all.” The problem? Eventually they have to come down and get off the bus. Then what?

Now, that’s not to say that there aren’t benefits to being a Christian. There are most definitely many ways we are blessed as Christians. But Tourist Christians are in it only (or primarily) for the blessings.

These are the kinds of followers we see in John 6:60-66. The scene is shortly after Jesus has fed the 5,000, He has just finished teaching that He is the Bread of Life and talking about eating His flesh and drinking His blood.

“On hearing [this teaching], many of His disciples said, ‘This is a hard teaching. Who can accept it?’ Aware that His disciples were grumbling about this, Jesus said to them, ‘Does this offend you? Then what if you see the Son of Man ascend to where He was before! The Spirit gives life; the flesh counts for nothing. The words I have spoken to you—they are full of the Spirit and life. Yet there are some of you who do not believe.’ For Jesus had known from the beginning which of them did not believe and who would betray Him. He went on to say, ‘This is why I told you that no one can come to Me unless the Father has enabled them.’

“From this time many of his disciples turned back and no longer followed Him.’”

They stuck with Him for the healing, the feeding, the show, and being part of the “in crowd.” But when the teaching got hard or the way got difficult, they left. These were tourist disciples.

Not everyone left, though. As we continue to read John 6, Jesus asks the Twelve Apostles, “You do not want to leave too, do you?” Peter responds, “Lord, to whom shall we go? You have the words of eternal life. We have come to believe and to know that you are the Holy One of God.” (verses 67-69) That is what was in it for them, and it had a practical impact in their lives every day.

Question: How can you recognize a Tourist Christian…or your own tendency to be one? Talk about it in the comments below, or on our Facebook page.