Parades: You Have Been Chosen 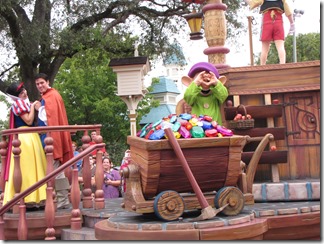 Not everyone who visits Disneyland or Walt Disneyland is a “parade person”, but I am. I love to watch the Disney parades, even just for a few minutes as I’m on my way somewhere.

Aside from, “What time is the 3 o’clock parade?” the next most commonly asked question by guests about the parades may be, “How can I be in the parade?”

Well, the short answer is usually, “You can’t.” Unless you’re a Cast Member, you don’t get to be in the parade. You have to be part of that exclusive group….

You see, in some parades, the performers come to the crowd and choose some to participate. Even beyond that, Walt Disney World has—or at least had, I hope they still do—a Grand Marshall Coordinator. I had the privilege of interviewing Dean Gaschler, who had that role for 14 years, on the Stories of the Magic podcast (episodes 14 and 15). He told me several stories of how he chose Grand Marshalls (from among the park guests that day) for the day’s parade.

Some were celebrating. Some were suffering. Some desperately wanted it. Some had no idea it was possible, But do you know what none of them did?

None of them earned it. Whether chosen by Dean or by the parade performers more informally, Guests became part of the parade not because of anything they had done to earn it or deserve it. They were chosen and they accepted the invitation. That’s it.

You’ve been chosen, too.

“Praise be to the God and Father of our Lord Jesus Christ, who has blessed us in the heavenly realms with every spiritual blessing in Christ. For He chose us in him before the creation of the world to be holy and blameless in His sight. In love He predestined us for adoption to sonship through Jesus Christ, in accordance with His pleasure and will—to the praise of His glorious grace, which He has freely given us in the One He loves. … In Him we were also chosen, having been predestined according to the plan of Him who works out everything in conformity with the purpose of His will, in order that we, who were the first to put our hope in Christ, might be for the praise of his glory. And you also were included in Christ when you heard the message of truth, the gospel of your salvation. When you believed, you were marked in Him with a seal, the promised Holy Spirit, who is a deposit guaranteeing our inheritance until the redemption of those who are God’s possession—to the praise of His glory.” (Ephesians 1:3-14)

What did you do to deserve it? Nothing. What merit do you bring to this? None. How did you earn this? You didn’t. If you are in Christ—and even this is not of yourself, it is the gift of God—these simply describe who you are. It is a part of your Supernatural Kingdom Identity.

No one can take it away from you. No one can devalue you. No one can legitimately say you are inferior, unloved, or worthless. To be blunt, you can’t even say it about yourself. God has made a statement of fact. Who are we to disagree with Him—especially since He’s the one who chose you in the first place?

This is important enough that I’m going to say it again. You have been chosen, adopted, included. A key aspect of your Supernatural Kingdom Identity is that you belong and are valued. It is simply true of you. Period. You can’t earn it, and you don’t have to. You just have to live in that truth.

Question: With this truth top of mind, what is one thing you can do differently to really embrace this part of your Supernatural Kingdom Identity? Talk about it in the comments below, or on our Facebook page.