Pinocchio’s Daring Journey: What are Your Strings? 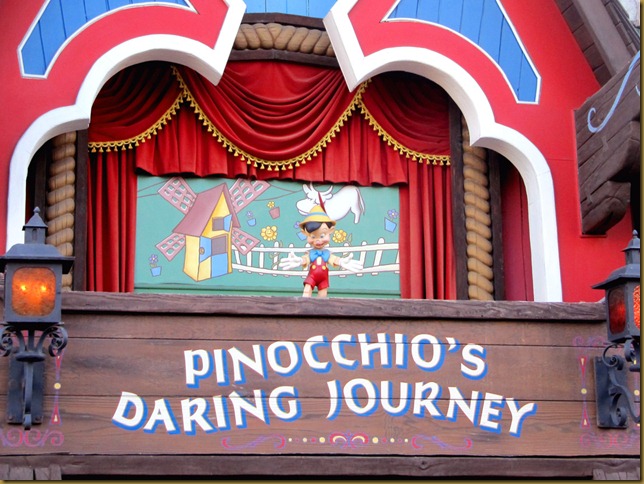 Pinocchio’s Daring Journey opened in Disneyland’s Fantasyland in 1983 as part of the “New Fantasyland” overhaul and expansion, led by Imagineer Tony Baxter and his team. It replaced the Fantasyland Theater (originally called the Mickey Mouse Club Theater). This classic-style dark ride retells the story of the little wooden boy who dreamed of one day being a “real boy”.

As the ride begins, we first see Pinocchio singing “Hi Diddle Dee Dee (An Actor’s Life for Me)”, but not in the original context from the film. The setting we see here is basically the scene in the movie where he sings “I’ve Got No Strings”.

That scene in the movie is very interesting to me. Of course, Geppetto made Pinocchio without physical strings, but the only way for the wish they share to be granted by the Blue Fairy is for the little wooden boy to prove himself be “brave, truthful and unselfish” and able to tell right from wrong by listening to his conscience. 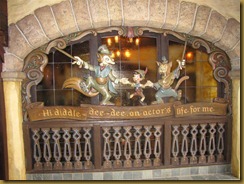 He starts out with the best intentions, but gets sidetracked Honest John and Gideon, and joins a puppet show led by Stromboli. It is here that he sings “I’ve Got No Strings”. He revels in his supposed-freedom, celebrating that he has no strings, he isn’t subject to anyone’s control and can do whatever he wants. That lasts right up until he tries to leave and Stromboli won’t let him. Pinocchio thought he was free to do as he pleased, but it turned out he was trapped in a slavery far worse than having strings.

Of course, Pinocchio does get to become a real boy, but only because he submits to the Blue Fairy’s requirements that she put on him at the beginning. He was still subject to someone other than himself, but this time it was for benevolent reasons and turned out for his best. By accepting those “strings” he was able to become what he most desired, and what his father, his maker, wanted for him.

Don’t we do the same thing? The heart of our separation from God is our claim that “we’ve got no strings”; we want to live the way we choose, and we may even flaunt our supposed independence. But the reality is that we are all servants of something, either our own sinful natures or to God. We will serve one or the other. As it says in Romans 6:16-23:

Don’t you know that when you offer yourselves to someone to obey him as slaves, you are slaves to the one whom you obey—whether you are slaves to sin, which leads to death, or to obedience, which leads to righteousness? But thanks be to God that, though you used to be slaves to sin, you wholeheartedly obeyed the form of teaching to which you were entrusted. You have been set free from sin and have become slaves to righteousness.
I put this in human terms because you are weak in your natural selves. Just as you used to offer the parts of your body in slavery to impurity and to ever-increasing wickedness, so now offer them in slavery to righteousness leading to holiness. When you were slaves to sin, you were free from the control of righteousness. What benefit did you reap at that time from the things you are now ashamed of? Those things result in death! But now that you have been set free from sin and have become slaves to God, the benefit you reap leads to holiness, and the result is eternal life. For the wages of sin is death, but the gift of God is eternal life inChrist Jesus our Lord.

We all have strings—something we serve, someone we seek to please, or even desires we just “can’t control’”. What we can choose is what those strings are.

Pinocchio sees strings as things that would “…hold me down / To make me fret, or make me frown / I had strings / But now I’m free / There are no strings on me…. / I’ve got no strings / So I have fun / I’m not tied up to anyone.” (Interestingly, as soon as he starts singing this song, the first thing that happens is that he trips and falls on his face.) That’s not necessarily the case, though. Many of the other marionettes in this scene can do things that Pinocchio just can’t, precisely because they are connected by the strings.

Who do you serve? Are you a slave to sin or to righteousness? What do you think the “strings” are that connect someone to God? Is Pinocchio’s view of strings as negative accurate?