In the story of Peter Pan, Peter brings Wendy and her brothers to Neverland, where he has a climactic showdown with Captain Hook. In the end, Wendy decides that her place is at home and she brings all the boys but Peter back to London. Peter returns briefly, and he meets Mrs. Darling, who has agreed to adopt the Lost Boys. She offers to adopt Peter as well, but Peter refuses, afraid they will “catch him and make him a man”.
How many kids relate to that? For that matter, how many adults do? It can be fun to stay a kid, to not have the responsibilities, the stresses.
Is it any surprise that Peter Pan’s Flight consistently has one of the longest line of any of the rides in Fantasyland? It’s common on a moderately busy day for this ride to have a 45 minute wait when most of the others are at 20 minutes or less (some even being walk-ons).
Granted, some if it is hourly ride capacity. But I have no doubt that some of it has to do with the desire to become immersed again in the adventures of The Boy Who Refused to Grow Up.
But there are perils to “I won’t grow up.”
Let’s go back to the original story by J.M Barrie, Peter and Wendy, shall we? This scene is towards the end of the book. Wendy and the boys have returned to England. Thanks to an agreement, Peter comes to visit after a year.

[Wendy] had looked forward to thrilling talks with him about old times, but new adventures had crowded the old ones from his mind.

‘Who is Captain Hook?’ he asked with interest when she spoke of the arch enemy. 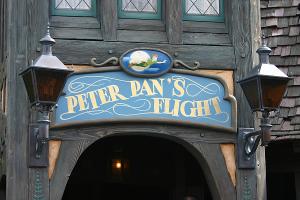 ‘Don’t you remember,’ she asked, amazed, ‘how you killed him and saved all our lives?’

‘I forget them after I kill them,’ he replied carelessly.

When she expressed a doubtful hope that Tinker Bell would be glad to see her he said, ‘Who is Tinker Bell?’

‘O Peter’ she said, shocked; but even when she explained he could not remember.

That’s the danger of “I won’t grow up.” You see, if you don’t grow up, you have no future. And with no future there is no need for a past. Nothing to look forward to, and nothing to learn from. It’s not natural. It’s not healthy. And that’s true not just physically, but spiritually.
It says in Hebrews 5:11-14,

“We have much to say about this, but it is hard to explain because you are slow to learn. In fact, though by this time you ought to be teachers, you need someone to teach you the elementary truths of God’s word all over again. You need milk, not solid food! Anyone who lives on milk, being still an infant, is not acquainted with the teaching about righteousness. But solid food is for the mature, who by constant use have trained themselves to distinguish good from evil.”

Do you see the expectation here? There will be growth. There will be maturity. There’s a bumper sticker that says, “I may get older, but I refuse to grow up.” Getting older is easy. Maturity takes some intentional effort.
The issue isn’t whether or not you’re saved, it’s whether you “grow in the grace and knowledge of our Lord and Savior Jesus Christ.” (2 Pet. 3:18) Without that growth you’ll remain a spiritual infant, at risk of falling prey to teaching that sounds good, but is empty at best and dangerous at worst. You’ll forget where you came from, and so lose your perspective on both where other people are, as well as where you’re heading.
If all you’re doing to grow in your faith is go to church once or twice a week—and you might not even be doing that—you won’t get very far. If you’re not reading the Bible (seeing what God has to say), praying (talking to God), and putting what you’re learning into practice, you won’t grow up in your faith.
Question: How are you putting intentional effort into your spiritual growth? Talk about it in the comments below, or on our Facebook page.