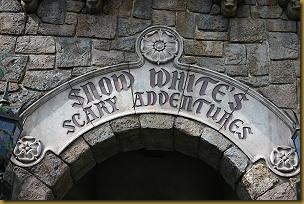 Snow White’s Adventures was an opening day attraction and for the most part the ride remains very similar to when it opened in 1955. According to Mouseplanet.com– “The big change is in perspective. The original conception of the attraction was that the rider was Snow White, and therefore she was never actually seen in the ride. As part of the New Fantasyland in 1983 this was changed so that Snow White is now seen in several locations during the ride. The name was also changed at that time from Snow White’s Adventures to Snow White’s Scary Adventures to emphasize that the ride would be scary to young riders.”

I was watching Snow White recently, and one line jumped out at me. At one point, Snow White says, “But you don’t know what I’ve been through. And all because I was afraid. I’m so ashamed of the fuss I made.” All because I was afraid. How telling. Fear is such a prevalent part of our lives. We spend so much time and effort trying to avoid or overcome things we’re afraid of, yet there is some fear that’s good.


The fear of the LORD is the beginning of knowledge, but fools despise wisdom and discipline. (Proverbs 1:7).

In his BasicSeries, Francis Chan talks about the fear of God. In it, he says, “As people would say certain things are unpopular, the church would almost get embarrassed of those things, like embarrassed of certain doctrines, maybe even embarrassed at the way God described Himself….One of the biggest issues that you see in Scripture is this idea of the fear of God.”

Often, Christian tend to downplay the word “fear”. I have been know to do it. We say things like, “Well, ‘fear’ doesn’t really mean to be afraid. It just means ‘awe and reverence’. It’s the same thing as being afraid of fire. It’s just having a healthy respect for the fire.” The problem with that analogy is that if God is like a fire, He’s not like a fire in our fireplace, or even a nice, healthy campfire. He is a raging inferno through a forest of all dry brush and trees. This is not something that commands a “healthy respect”.


The reality is, we sometimes either lose sight of who God truly is, or we try to minimize Him to make Him seem more approachable. But consider: He is the Creator of the universe. Everything that exists does so because of Him. He is holy. He is omnipotent and omniscient. He is. The fear of the LORD is the beginning of wisdom. Isn’t it entirely appropriate, understandable, and even expected to fear Someone like that? Doesn’t casual familiarity or even disregard become unthinkably presumptuous?

Again, Francis Chan: “In church, we started going … let’s talk about the other areas of God. But if we skip the fear of God, we won’t understand the other areas….when people came in contact with this God, it didn’t look like just a respect or an awe…it sure appears that they are terrified.…The reality is, whoever you are, the moment you see God, you are going to fear Him.”

We start with a fear of God. But we don’t have to stay there. Consider what comes next:

“Woe to me!” I cried. “I am ruined! For I am a man of unclean lips, and I live among a people of unclean lips, and my eyes have seen the King, the LORD Almighty.” Then one of the seraphs flew to me with a live coal in his hand, which he had taken with tongs from the altar. With it he touched my mouth and said, “See, this has touched your lips; your guilt is taken away and your sin atoned for.” (Isaiah 6:5-7)

When I saw Him, I fell at His feet as though dead. Then He placed His right hand on me and said: “Do not be afraid. I am the First and the Last. I am the Living One; I was dead, and behold I am alive for ever and ever! And I hold the keys of death and Hades. (Revelation 1:17-18)

God says, “I am the Creator of everything. I am this amazing God that you should fear. But once you get to that point, once you understand that, you don’t have to fear Me.” What does our worship look like when we understand God like that? Doesn’t it become entirely reasonable to trust Him?

One of the most often repeated command in Scripture is, “Don’t be afraid.” One last time, Francis Chan: “Then we would see, okay, now I know why I need to fear this God. And now I don’t want to just flippantly disobey His commands anymore. I want to take Him seriously, but not just that … it would change our whole mindset, ‘cause we’d realize, now that I’ve seen Him, I realize there’s nothing else to fear.”

The fear of the LORD leads to life: Then one rests content, untouched by trouble. (Proverbs 19:23) 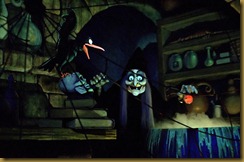 Snow White had very good reasons to be afraid. She was being targeted for murder by the Wicked Queen. Until she happened upon the Seven Dwarfs, she was lost and alone in a dark, scary place. That was her reality. But we know that often these Fantasyland attractions remind us that what we see is not what is true. The fantasy disguises a greater reality, and that is the case with Snow White’s Scary Adventures.

Sometime we, too feel lost and alone. We feel like we’re being unfairly and unjustly targeted or attacked. But we know something that Snow White didn’t: Unseen but ever-present is our God. We start with fearing God and out of that comes comfort. From that place of refuge we can stand, even when the world seems completely against us, not in our own strength, but shielded and loved by The One who is bigger than all our problems, our fears, our challenges. Without the proper perspective, we remain trapped in these “scary adventures”. With the proper perspective, we stand and say, “If God is for us, who can be against us?” and these become more than just words.