This week we continue our series in honor of Disneyland’s anniversary (on July 17), devoting this month’s posts to the attraction that I consider the most quintessentially “Disney”:Storybook Land Canal Boats. 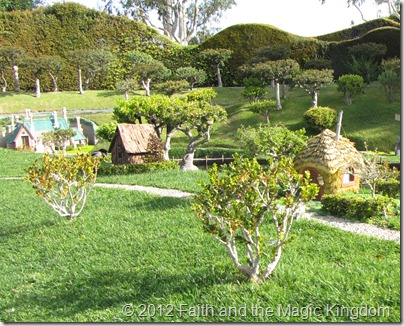 Most everyone is familiar with the story of the 3 Little Pigs, especially as told in the 1933 Silly Symphony. If you’re not, take 8 1/2 minutes and watch the short. Now, as is often the case, the story we see in the short is somewhat different than the original story, but for now we’ll just go with it as Disney did it.

The story begins with one little pig building his house with straw, one with sticks, and one with bricks. The first two just want to get it done so they can play their flute and fiddle and have fun. But the third one knows the danger that’s coming and keeps building his brick house.

The Big Bad Wolf comes and, of course, blows the first house down. The lone scared little pig runs to his brother’s house of sticks, and the wolf blows that one down, too. It’s a bit more effort, but he does.

So the two scared (and homeless) little pigs run to the brick house of their brother. In here they are safe, but when the wolf comes after them, they cower under the bed. the wolf tries trickery, force, and even coming down the chimney, but in every case the Big Bad Wolf is thwarted.

The first two pigs (later named Fiddler Pig and Fifer Pig) are traumatized and their security destroyed, but then they seek refuge in the strong house their brother (Practical Pig) built. When the wolf attacked, he even took further steps to protect them. And yet every time they felt threatened, they hid, not trusting in the more secure house or in their brother.

We do the same thing, don’t we? We start out on our own, building our house with the materials we have in our own strength and resources—flimsy as that house may be. Then problems come and our house collapses around us.

So we turn to others, to systems, ideas, programs, or people who seem like they have it more together than we do. That goes a little better, and there is some value in them. But ultimately the wolf comes back and that house crumbles, too. 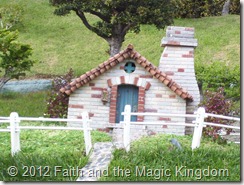 Finally we run to our Brother, Jesus, and the house He made. We take refuge in Him and His word. We hear His words and put them into practice. We live there with Him as our strength and our shield.

Then the wolf comes. Calamity strikes and what do we do? We hide in fear. We are safe in His house, and nothing can truly harm us. Sure, we may face still face pain and suffering, challenges and setbacks, but our hope and our future is secure. We have His strength and don’t have to trust in our own. We have His wisdom and guidance and don’t have to be in control of everything and have a backup plan for the backup plan.

But still we hide. Still we fear. Fear that the house will once again crumble.

Who shall separate us from the love of Christ?Shall trouble or hardship or persecution or famine or nakedness or danger or sword? As it is written:

“For your sake we face death all day long;
we are considered as sheep to be slaughtered.”

No, in all these things we are more than conquerors through him who loved us. For I am convinced that neither death nor life, neither angels nor demons,neither the present nor the future, nor any powers, neither height nor depth, nor anything else in all creation, will be able to separate us from the love of God that is in Christ Jesus our Lord. (Romans 8:35-39)

Question: What do you still fear that now holds no real threat to you because you are in Christ? Talk about it in the comments below, or on our Facebook page.