Storybook Land Month: A Diamond in the Rough

In honor of Disneyland’s anniversary this month (on July 17), I will devoting this month’s posts to the attraction that I consider the most quintessentially “Disney”: Storybook Land Canal Boats. It features miniatures (which were dear to Walt’s heart and the part of the genesis of his idea for Disneyland). It is a ride the entire family can experience together. It can be appreciated and enjoyed on multiple levels. And it’s detail is incredible. 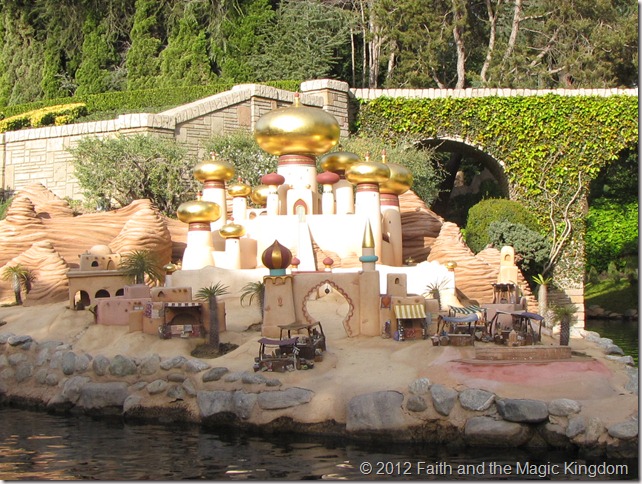 We start with the city of Agrabah and the Sultan’s Palace from Aladdin. Obviously not there when the attraction first had its miniatures installed (since they debuted on June 16, 1956), this scene was one of several added in 1994. It replaced Toad Hall, which moved to another location about a year later.

The principle lesson of Aladdin is basically “Don’t judge a book by its cover”. By all appearances, Aladdin is worthless in the eyes of his society: an orphan, homeless, a thief. He is clever, but that only gets him in trouble. He has a good heart, but doesn’t have an opportunity to show it until he meets Jasmine.

In the city of Agrabah below, he is just a street rat. In the palace above he pretends to be Prince Ali, all show to impress others, but not true to who he is. He loses his way, as most of us do at one time or another,  but the truth of his character is revealed when he passes the test at the Cave of Wonders, and its depth only shown when he risks his life to save Jasmine and the Sultan…and then uses his last wish to grant the Genie his freedom.

It’s easy to judge by appearances, and even by actions. In  both cases, we can easily be wrong. Appearances can be deceiving. Actions can have roots, causes, and circumstances surrounding them that we don’t see or understand.

“Do not consider his appearance or his height, for I have rejected him. The Lord does not look at the things man looks at. Man looks at the outward appearance, but the Lord looks at the heart.” (1 Samuel 16:7)

This doesn’t mean we can never have an opinion, or even call a brother or sister in Christ on sin when we see it, though that should be done carefully, and with grace and love. It does mean that it’s usually wiser to give people the benefit of the doubt. Give people the chance to surprise you in a good way.

And don’t assume that someone is worthless…because everyone has value to God. Including you.

Question: Have you ever been surprised by someone who turned out to be “a diamond in the rough”? Talk about it in the comments below, or on our Facebook page.