Submarine Voyage: Do You Talk About What Happened? 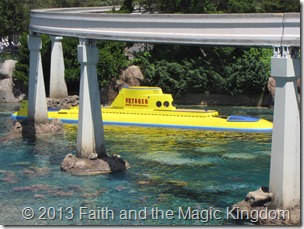 “Should I enter any of this into the log?”

“No, forget it. Nobody would believe it anyway. Better take her up…”

These words, or something very close to them, have been part of the Submarine Voyage narration from its opening in 1959 through today. There’s been an unexpected adventure through “liquid space.” Depending on on the incarnation of the attraction, it may have been an encounter with a sea serpent, mermaids, discovering the lost city of Atlantis, an active undersea volcano, a clownfish looking for his son, being swallowed by a whale, and more!

When the excitement is over, though, the captain says not to write it down. Don’t bother telling anyone. No one would believe it anyway. There have been incredible sights, the answers to age-old questions. But no one will get the benefit of these. Why? Who knows? Maybe the captain doesn’t believe they really saw it (evidence to the contrary). Maybe he’s afraid of appearing foolish. Maybe some other motivation. Whatever the reason, though, he keeps these amazing things to himself.

Do you do the same thing? Sure, you’ve probably never seen a mermaid or a sea serpent, but what about seeing God working in your life, or the people around you?

If you’ve been a Christian for any length of time, you’ve probably had one or more of these happen to you or seen it happen to someone around you. When it does, do you talk about it? Or are you afraid people won’t believe you, or that you’ll come across as strange? Do you think maybe it was just coincidence—or you think others will say that?

What if the shepherds who came to see the baby Jesus had kept it to themselves? What if the women who saw the angel and the empty tomb figured no one would believe them? What if John received his Revelation from God but didn’t say anything for fear of seeming weird?

There are many current examples, too. When God moves in our lives, we need to tell others about it. By doing so, you can encourage them, help them to have their faith strengthened, or maybe even be the nudge they need to finally accept Jesus. We become His messengers when we tell people, “Look what God is doing!”

And the stories serve as reminders to ourselves when times gets hard, light grows dim, and we wonder where He is. Yet we remember that the One who did it before can do it again.

Question: Have you seen God answer a prayer or do something that you know was Him at work? Tell us about it in the comments below, or on our Facebook page.