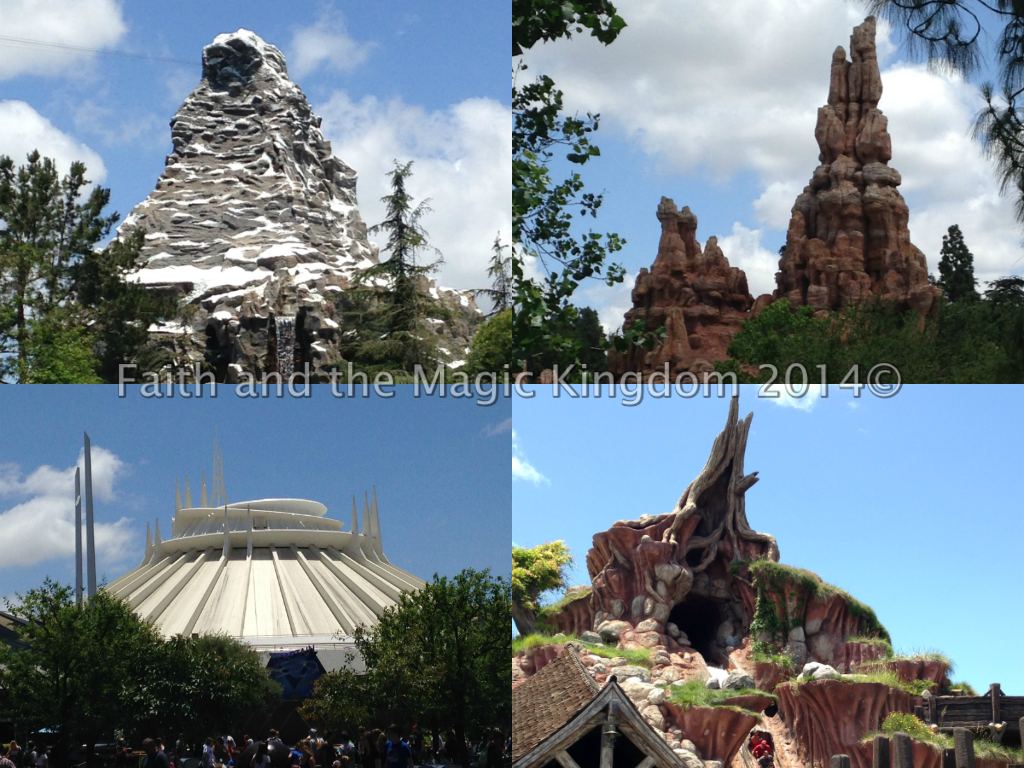 The four mountains of Disneyland make up what is unofficially known as the Disneyland Mountain Range.

I’ve written before about each one of them individually, but today we’re going to take a little tour of all four mountains together.

But before we do, consider this passage from the Psalms:

You may be more familiar with “hills” in place of  “mountains,” but in either case the meaning is the same. The psalmist wasn’t looking to the mountains for help. He saw the mountains and was afraid. Help didn’t come from the mountains, danger did. Mountains meant treacherous passes, robbers, dangerous paths, and more.

When he gazed upon the mountains he thought, “I have to go through there. But how? It’s such a dangerous place.” And so he wrote, “I lift my eyes to the mountains–where does my help come from?” These are places of danger, risk, fear, and uncertainty. How will I face them? Then he answered his question: “My help comes from the Lord, the Maker of heaven and earth.” When facing such overwhelming danger and fear from what the mountains represented to him, he turned to his only source of safety–God Himself.

Now, we will briefly explore each of the Disneyland mountains. Each one represents risk, and a choice. 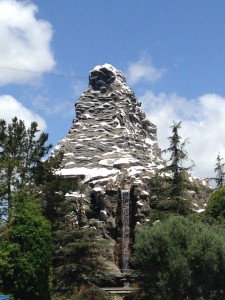 The Matterhorn – When Sleeping Beauty Castle was being built, the construction crew needed a place to put the dirt they dug out to make the moat. So they piled it up behind and slightly east of the castle. A few years later, that pile of worthless dirt got turned into a revolutionary attraction, the first tubular steel roller coaster. With this re-creation, the space, was redeemed, being turned from something largely useless into something incredibly useful. At the same time, the Matterhorn became only the second attraction to exist in two lands–Fantasyland and Tomorrowland. (Technically the first, since the Skyway was considered two attractions–the Skyway to Tomorrowland and the Skyway to Fantasyland.)

This mountain represents two decisions. First, the choice to become a disciple of Jesus. When you do, He redeems you. He ransoms you from death and gives you eternal life. You have worth, value, and significance not because of what you’ve done, but because of what He did for you.

This may be the biggest choice and the biggest (perceived) risk of all, because it’s the choice to surrender everything to God and follow Him. You won’t do it perfectly, but growth means continuing to draw closer to Him and in the process to become more of the person He wants you to be. As you do, you move from one land–the land of fantasy, illusion, wishful thinking, futility, fear, and trying to earn significance–to another–the land of the future, full of hope, promise, joy, and life. 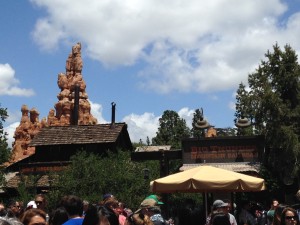 Big Thunder Mountain Railroad – For many guests, this is a great “starter coaster.” On it, some guests overcome their fear of coasters and ride for the first time, while others (like me) use it overcome a traumatic coaster experience from the past and learn to enjoy them again.   At the same time, the Imagineers have gone to great lengths to tell a story about fears and conquering them.  Runaway trains with no visible operators, mysterious glowing pools, dynamite-chewing goats, darkness, and more all scream, “Fear lives here!” But the trains themselves, with names like I.M. Brave, I.B. Hearty, and U.R. Courageous answer back, “Fear has no hold on us!”

The decision here is how to deal with fear. There are things to be afraid of everywhere. Disease, the economy, the future, relationships, and the unknown conspire together to keep us cowering, never venturing out to be who we could be and live the life we were meant to live. But it doesn’t have to be this way. Living in fear is a choice. When we choose fear, we turn our backs on faith.

Space Mountain – The second of the mountains didn’t open until almost 20 years after the first. The idea for Space Mountain began in 1964, but due to several issues, including technological limitations, it was shelved for several years. One of the most thrilling rides in the park, it’s also one of the few where throughout the ride guests can not predict what’s coming next. The track is completely in the dark, so guests must simply enjoy the ride–as scary as it might be for some.

This mountain is about the future. Big Thunder Mountain Railroad can represent fear of the future, but it doesn’t have to. The decision here is to trust God for the journey. The alternative is to insist on “playing it safe” and knowing what’s going to happen before taking a step. Of course, life doesn’t work like that, and continuing to refuse to act until the end result can be predicted with certainty simply means a different kind of risk. It’s risking missing out on all that God has for you, simply because you didn’t trust the One who created the path enough. I know that sounds harsh, but that’s really what’s behind it.

Splash Mountain – The final mountain in Disneyland’s Mountain range is quite different from all the others. It’s the longest. It has a major “dark ride” element to it. It is much more obviously story-driven, even if most guests have no idea what the source material is. And rather than being a coaster, it is a log flume ride. A cautionary tale to not be like Br’er Rabbit, Splash Mountain links guests with the rabbit as we experience his adventure, from escaping Br’er Fox and Br’er Bear’s traps to being thrown into the Briar Patch. What the hare’s nemeses don’t know, though, is that the Briar Patch is home to him. By being thrown in there, he finds his true “laughing place.”

This final mountain is about choosing joy. Not happiness, nor a laughing place. Both of those are fleeting. They depend on circumstances and are ultimately unfulfilling. Joy is chosen when we realize what God has done for us and what value we have in Him and through Him. When we face our fears and say, “The Lord is with me; I will not be afraid. What can mere mortals do to me?” When we willingly, though imperfectly, trust God to lead us to a place we often can’t see, confident that He knows and that it is ultimately best for us.

Dallas Willard said, “Joy is not pleasure, a mere sensation, but a pervasive and constant sense of wellbeing. It claims our entire body and soul, both the physical and the non-physical side of the human self. Hope in the goodness of God is joy’s indispensable support.” It doesn’t depend on circumstances, nor on things going our way. It comes from knowing that God is good, that we are His, and that nothing can overtake those two truths. As a result, it really is a choice, not merely a feeling.

Kingdom Thinking: As you lift up your eyes to the mountains, where will your help come from? Will you allow the Maker of heaven and earth to give you the boldness to brave each mountain?