The Sword in the Stone: It’s not What Others Say or Do (re-post) 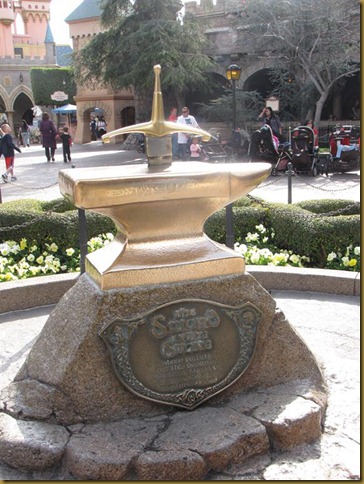 As this post is published, we are 3 days away from the launch of Faith and the Magic Kingdom. That makes for a very busy week, but I still want you to have some content, so I’m re-posting one of my most popular posts.

(By the way, this is also one of the stops on the “Faith and the Magic Kingdom Audio Walking Tour” that is one my Launch Week bonuses. Buy the book on Amazon November 15 – 24 and email me {at a link I’ll post here when it’s live} and you’ll get special access to 4 bonuses, one of which is this MP3 audio tour! Visit the book’s section of this website for more information about the book and to get the Amazon link.)

Have you noticed what effect your relationships have on how you view yourself and what you are willing and able to do? I know I have.

On the other hand, bad relationships can lead to fear, self-doubt, and even self-loathing. In some cases, we get so caught in these relationships that we either blind ourselves to the difficulty—even abuse—we receive, maybe because we think we don’t deserve any better, or can’t do any better, or just don’t have a frame of reference that it can be different. My capacity to love is squelched, or even smothered, because what love I have tried to show has not been returned, and has even been ridiculed (actively or passively) by those whose opinions matter most to us. Like a flower deprived of light and water, we wither. And when (or if) we get out of those toxic relationships, rediscovering all those things that had been denied to us can be a difficult (if also exciting) journey.

But what does that have to do with Disneyland?

Over the last several months, we looked at many different kinds of lessons and reminders. About faith, adventure, Bible Study, creativity, music, service, unity, and more. But there is one truth we’ve so far not touched on, but it’s one of the most important. Without it, the rest loses much—maybe all—of it’s meaning. And we get our reminder of this truth at the heart of the Magic Kingdom.

Walk with me down Main Street U.S.A., pass the Partner’s Statue in the Hub, and through the Sleeping Beauty Castle forecourt. We’re not stopping yet, though. Cross the drawbridge and walk through the castle into Fantasyland. Continue straight ahead and the first thing you’ll run into (unless there happens to be an outdoor vending cart in the way), is a stone & anvil right in front of King Arthur’s Carousel. A very special stone and anvil with a sword stuck in the top. Yes, our reminder is The Sword in the Stone, and what it serves to remind us of is the Love of God. 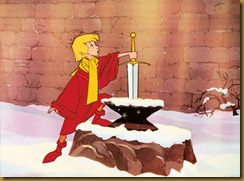 Consider the story of Arthur Pendragon, king of all Britain. As one version of the legend goes, after the King of England, Uther Pendragon, died, the “Sword in the Stone” appeared in London with an inscription proclaiming that “Who so Pulleth Out This Sword of this Stone and Anvil, is Rightwise King Born of England”. Nobody can remove the sword, which is soon forgotten, leaving England in a Dark Age.

Years later, Arthur (a.k.a. Wart), a 12-year-old orphan training to be a squire, accompanies his older foster brother Kay on a hunting trip. Through a series of events, he meets Merlin, who becomes his tutor and mentor. Kay treats Arthur very badly, though. He is mean, rude, and even abusive to Arthur. In fact, the only one who seems to care about Arthur at all is Merlin—because Merlin can see something in Wart that the others can’t…or won’t. Eventually (spoiler alert), Arthur pulls the sword from the stone, fulfilling the prophecy and becoming King.

The Sword in the Stone that sits here in Fantasyland gave guests a chance to live that event for themselves, more or less. Merlin the Magician appeared several times a day to announce that the Realm was having a (temporary) leadership crisis, and needed a new (temporary) Ruler. But can someone be found who has the requisite courage and strength to be the new Ruler? Merlin selected several volunteers who attempt to pull the sword from the stone. (Typically a rather burly man will be the first selected, and will fail miserably, only to be shown up by a 5-year-old.)

Arthur was destined to become King, but no one saw his worth except Merlin, and Merlin refused to give up on him. God does the same for us, because He loves us.

Consider all of God’s attributes. Now consider that very few places in the Bible does it say that “God is” something, and one of those is that “God is love.” This is one trait that more identifies and defines who God is than anything else. God gives grace. He gives peace. He creates. He administers justice. But He is love.

“For God so loved the world that He gave his one and only Son,that
whoever believes in Him shall not perish but have eternal life.” (John 3:16)

“The LORD your God is with you,
He is mighty to save.
He will take great delight in you,
He will quiet you with his Love,
He will rejoice over you with singing.”
(Zeph. 3:17)

“But God demonstrates his own love for us in this: While we were still sinners, Christ died for us.” (Romans 5:8)

“For I am convinced that neither death nor life, neither angels nor demons, neither the present nor the future, nor any powers, neither height nor depth, nor anything else in all creation, will be able to separate us from the love of God that is in Christ Jesus our Lord.” (Romans 8:38-39)

“How great is the love the Father has lavished on us, that we should be called children of God! And that is what we are!” (I John 3:1a)

God loves you so much that He sent Jesus to die for you, so that you can have eternal life if only you will believe in Him. He takes great delight in you. Nothing can separate you from His love. You are called a Child of God. He knows the value you have, and you have it simply because you are His child. It’s not because of anything you’ve done to earn it. And there’s nothing you can do that will make Him love you less.

Still, He won’t force Himself on you either. If you choose to accept Him, all of this describes you and you will have eternal life with Him. If you choose not to accept or believe in Him, He loves you so much that He will not force you to spend eternity with Him, and one place has been reserved where He is not. It is your choice.

Wart was to be King of England whether anyone knew it or not. Before his true identity was revealed, some people treated him very badly. Even he didn’t see the potential he had, because he thought he was limited by his station in life and that what others said about him was true. And then he learned otherwise when he pulled a sword from a stone (which was sitting in a churchyard, incidentally). 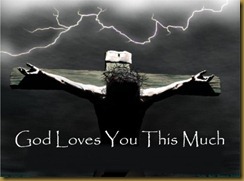 You are a child of God and He loves you. Others may treat you badly, they may abuse you, put you down, and try to extinguish the love you have for others and for yourself.You may believe that you deserve it, but you don’t. After all, who knows your value more than the One who made you? And He says you are worth more than you can imagine.

Let The Sword in the Stone stand as a monument of God’s love for you. Just as the sword revealed Arthur’s true identity, let it remind you that you are a Prince or Princess-because you are a child of the King of Kings! Nothing anyone can say or do can ever take that away from you, and it remains true no matter what others say about you or how they treat you.