The Treehouse: Aliens and Strangers 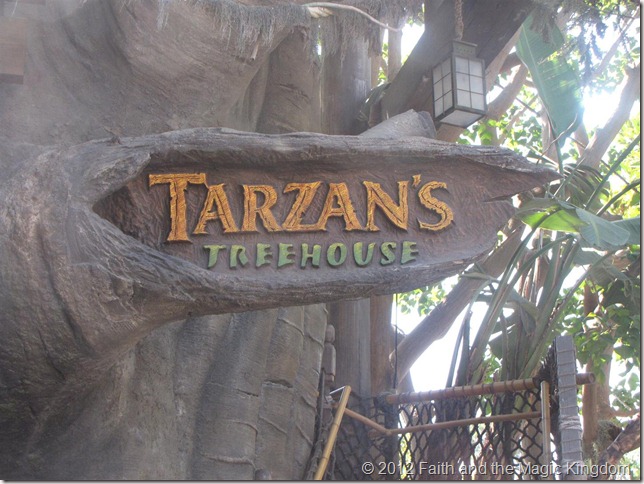 The Swiss Family Treehouse opened November 18, 1962, the first significant attraction added to Adventureland since Opening Day. Based on the popular live action movie, the Disneyland version was not only modeled after the look of the treehouse in the film, but was decorated throughout as though the family was still living there and we had just missed them.

Sadly for many, the Robinson family was evicted in the spring of 1999, and in the summer of the same year, Tarzan’s Treehouse opened (one day after the animated feature premiered in theaters. A new tree suddenly grew next to the main tree and a suspension bridge connection the two was built. As with many Disney attractions, there is still a homage to the Robinson family. Listen carefully to the music playing on the gramophone.

The Swiss Family Robinson and Tarzan have something more in common than just living in a treehouse, though. Both were shipwrecked and forced to live in a place that wasn’t truly their home. In general, Tarzan adjusted the best, but in all their cases, they lived in a place and among a people (or animals) that were not their own. They were “aliens and strangers.” The Robinson family in particular were forced to live in one place while knowing they had another home “out there”.

Does that ring any bells? Peter and the writer of Hebrews both describe us, followers of Christ, people of God, the same way.

“Dear friends, I urge you, as aliens and strangers in the world, to abstain from sinful desires, which war against your soul. Live such good lives among the pagans that, though they accuse you of doing wrong, they may see your good deeds and glorify God on the day He visits us.” (1 Peter 2:11-12)

“All these people were still living by faith when they died. They did not receive the things promised; they only saw them and welcomed them from a distance. And they admitted that they were aliens and strangers on earth. People who say such things show that they are looking for a country of their own. If they had been thinking of the country they had left, they would have had opportunity to return. Instead, they were longing for a better country—a heavenly one. Therefore God is not ashamed to be called their God, for He has prepared a city for them.” (Hebrews 11:13-16)

This world is not our home. We live here for a while, but our ultimate home is in Heaven. The more preoccupied with where we live now, the more difficulty and trouble seem overwhelming, because there’s nothing else to look forward to, no better place. If your home is bad, what hope is there? We live in one place and eagerly await another. And God, by His grace, has given us the Holy Spirit so that we have a taste, a promise, and a reminder of that future home now.

Just as a dolphin lives in the water but must breathe the air, so we live on the earth but must be refreshed by God in heaven. If the dolphin only focused on the water, it would die because it never got the air it needed. If we only focus on the world around us, we will do the same.

Question: Have you ever felt “homesick for heaven”? Talk about it in the comments below, or on our Facebook page.