Walt’s Apartment: “Never Will I Leave You” 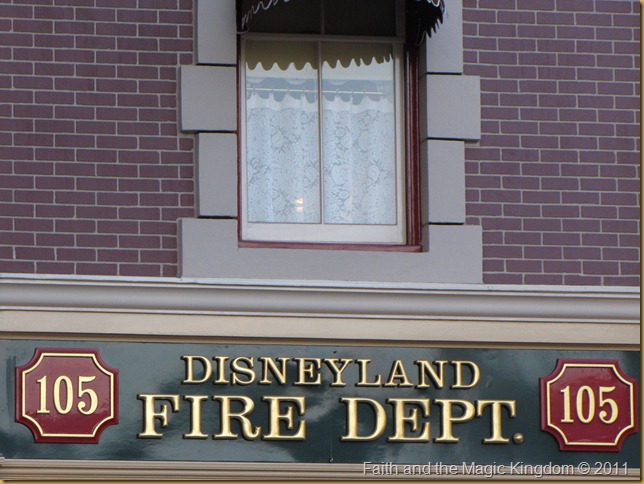 It’s one of those little details that’s so easy to overlook, yet it’s in plain sight. Just above the Fire Station (next to Town Hall) is a window with a light in it. So what?

While Disneyland was being built, Walt Disney wanted a place for him and his family to stay, so he could keep an eye on things. He had an apartment constructed on the second floor of the Main Street U.S.A. Firehouse, private, and hidden from the rest of the park. When he worked in the apartment, he often worked at a small wooden desk near the window facing Main Street. If you’d like a peek at what the apartment looks like now (it has been maintained as much as possible to preserve its original state), check out the Disney Parks Blog.

Sharon Baird, one of the original Mouseketeers, was there opening day:

“On the opening day of Disneyland, we (Mouseketters) were in Walt Disney’s private apartment above the Main Street Fire Station when the gates of the park opened for the first time. I was standing next to him at the window, watching the guests come pouring through the gates. When I looked up at him, he had his hands behind his back, a grin from ear to ear, I could see a lump in his throat and a tear streaming down his cheek. He had realized his dream. I was only twelve years old at the time, so it didn’t mean as much to me then. But as the years go by, that image of him becomes more and more endearing.”

That’s the window you see when you look above the fire station. The window where Walt Disney sat and worked. The window he looked out of to watch people come to his Magic Kingdom for the very first time.

Over the next decade, whenever Walt was in Disneyland the light in his apartment window was on. This became well know to the Cast Members who worked during this time, and they would look for this light to find out if Walt was there or not. Since his death, the light is left on in the window symbolize Walt Disney’s spirit and presence at Disneyland. The only exceptions are at Christmas time (when a small tree is in the window), and when his daughter Diane Disney Miller is in the park, out of respect for her.

It’s a reminder of where this place came from, whose dream it was, who we have to thank for it. Every time I leave—and most of the time when I enter—I take a moment to glance at the window and say a silent “thank you” to Walt Disney.

That reminder of the presence of the creator has a parallel in Communion, but today it serves as a connection to a promise that was made in Scripture. It’s made more than once, but we’ll just look at one.
Hebrews 13:5-6

“Keep your lives free from the love of money and be content with what you have, because God has said,
‘Never will I leave you;
never will I forsake you.’
So we say with confidence,
‘The Lord is my helper; I will not be afraid.
What can man do to me?’”

God  makes a promise that you can’t get around. If you are His child, He will not leave you…ever! You may have been abandoned—because someone left, or even if they died. You may have been betrayed. You may be afraid of what the future holds or convinced that your past (or present) makes you unlovable. But if you’ve accepted Jesus Christ, you have been adopted into His family. You don’t have to achieve a certain status or worry about whether you have (or are) enough. He chose you. He loves you. And He will never leave you or forsake you.

Next time you enter Disneyland, and again when you leave, don’t hurry through Town Square. Take a moment to look above the Fire Station. Think for a moment about Walt Disney, and the light that reminds us that his spirit is always there, because he is so much a part of Disneyland. Then let that remind you of Someone Else who is always present, not just in memory, but in reality.


What reminds you of God’s presence in your life? What do you do when life gets hard and you don’t feel that presence?