Alice in Wonderland: Making Sense of “Curiouser and Curiouser”

Over the weekend, I spent two full days at the Disneyland Hotel for D23’s “Destination D: Disneyland 55” event, and I learned so much–about Disneyland, about the people behind it (then & now), and even about myself. There were several times during the event that I thought, “This relates perfectly to my blog/future book!”

It was an amazing, educational, entertaining, magical time, and I’ll be including as much as I can of what I learned from it (and some pictures I took) in future posts–maybe even including a full “special, off-topic” post devoted just to the Destination D. There was so much to it, though, that I still need more time to process and reflect before I can share in any way other than just a “brain dump” of everything I can remember. 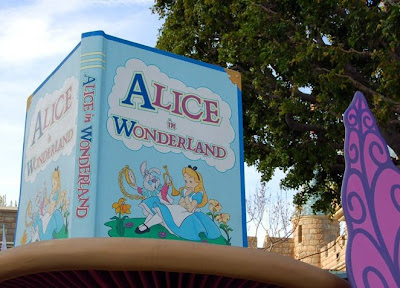 Several weeks ago, I wrote about Peter Pan’s Flight, and how it relates to spiritual maturity.

We’re going back to the subject of maturity and growing up today, but let’s move around the corner in Fantasyland to Alice in Wonderland.

Alice falls down a rabbit hole, changes size unexpectedly (and repeatedly), and attends a tea party given by a March Hare. Along the way, she meets such unusual characters as the Mad Hatter, the Caterpillar, the Cheshire Cat, the Red Queen, and others. Alice knows this isn’t the real world because things just don’t make sense.

But who ever said life would make sense all the time?

Each time Faye or I lost a job—and there have been a few times—I’ve tended to try to look for the reason why the job was lost when it was, or why she or I was there as soon as I can. 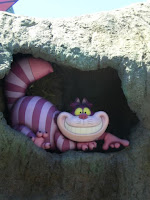 You know what? I’ve given up on trying to figure out why any more. Oh sure, I still think about it, but it doesn’t bother me nearly as much that I often don’t have a definitive answer anymore. Sometimes it’s obvious right away. Most of the time it’s not. And it doesn’t have to be. Even prophecy nearly always made sense only after the fulfillment.

But life doesn’t have to make sense for me to trust that God is in control. I don’t have to understand exactly what’s happening to know that God is working through it all. In fact, if I only trust Him when life makes sense, what good is that?

“Great is our Lord and of great power; His understanding is inexhaustible and boundless.” (Psa. 147:5, AMP)

“And we know that in all things God works for the good of those who love Him, who have been called according to his purpose.” (Rom. 8:28)

When life gets “curiouser and curiouser”, you really can trust that God is not surprised by anything that’s happening, and even though you may never understand it this side of Heaven, He will use it for your good if you trust Him.