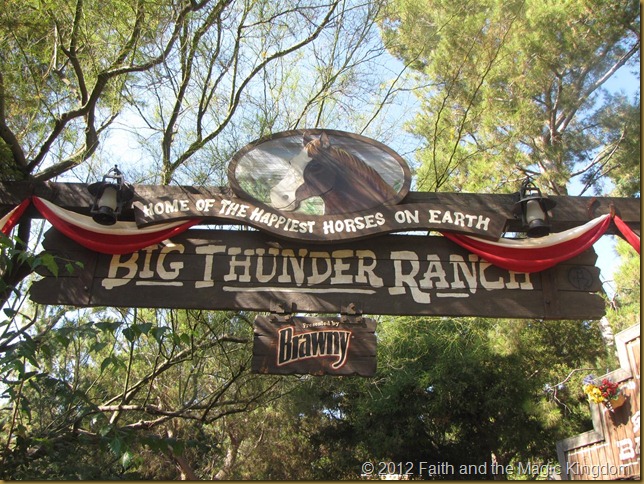 The Big Thunder Ranch Petting Zoo is tucked away along Big Thunder Trail in Frontierland, the path between Big Thunder Mountain Railroad and Fantasyland. Formerly part of the Mine Train Through Nature’s Wonderland (as far back as 1960), when that attraction was closed in 1977 this patch of land sat unused for nearly a decade. Big Thunder Ranch, including the petting zoo, opened in 1986.

Inspired by the western ranches of the 1880s, Big Thunder Ranch features a small wooden ranch house and petting barnyard where young cowpokes can meet and pet barnyard animals, such as cows, goats, sheep, donkeys and pigs. From time to time, the ranch has even served as home to the Thanksgiving turkeys pardoned by the President of the United States.

When I think of petting zoos, and this one in particular, I think of sheep. Sure, there are other animals, but mainly sheep. The obvious connection here? Christians are called the sheep of God’s pasture, and Jesus the Good Shepherd. We’ll look at the Good Shepherd connection later. For now, I want to focus on us—the sheep.

“Yet for Your sake we face death all day long;
we are considered as sheep to be slaughtered.” (Psa. 44:22)

“But He brought His people out like a flock;
He led them like sheep through the desert.” (Psa. 78:52)

“When He saw the crowds, He had compassion on them, because they were harassed and helpless, like sheep without a shepherd.” (Matt. 9:36)

When we imagine sheep, we might image cute, fluffy, and gentle creatures. we may think of Jesus holding a little lamb in His arms. People who have spent a great deal of time around sheep will tell you a different story, though. Sheep are:

And we are called sheep. Not a very flattering picture, is it? If we’re honest with ourselves, though, they’re true, especially when we compare ourselves not to other sheep, but to the Shepherd.

We wander off at the least provocation. We’re fearful. We’re slow to learn the lessons God tries to teach us. We are totally dependent on God (though some may not want to admit it). We’re stubborn beyond reason. And we are restless. If they are hungry, afraid, not at peace with each other, or bothered by insects, sheep will not lie down. Are we any different?

But sheep have one other characteristic: they are valuable to people. People use sheep for wool, milk, and meat. Their horns were (and in some cases, still are) used to make musical instruments or to hold oil. And under Jewish law, they were used for sacrifices.

Their value is not recognized by other sheep (as far as I know). It doesn’t come from how good they are at being sheep, or whether they obey the shepherd. It’s just because they are sheep, the shepherd cares for them, and they are what they are.

That’s you. Maybe not all that pleasing or appealing when you look at yourself, or compare yourself to others—but valuable to God. He made you. He loves you.

So when you see a petting zoo, look more closely at the sheep. Then remember that you are one of God’s sheep and are valuable to Him.

Question: Which of these characteristics do you most identify with? What does it change to remember your intrinsic value? Talk about it in the comments below, or on our Facebook page.