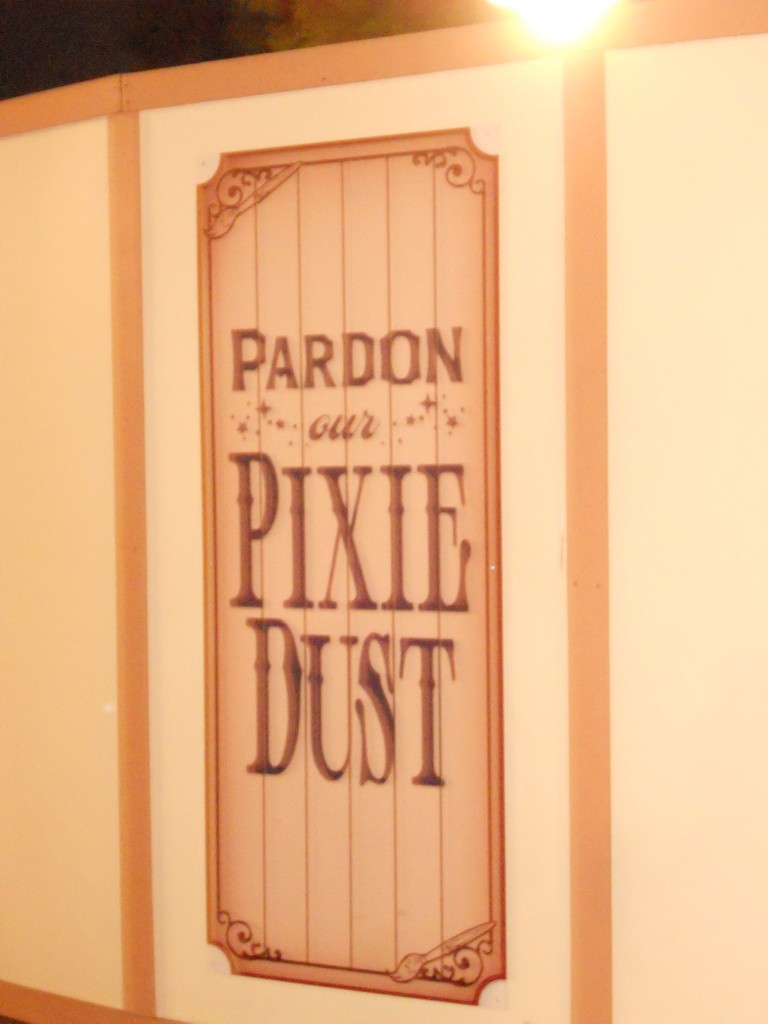 When Disney Imagineers close an attraction to do maintenance, refresh it, or even overhaul it, you’ll likely see a “Pardon Our Pixie Dust” sign. This is their way of letting you know that even though can’t currently enjoy the attraction, they’re working on it and soon it will be back and better than ever.

In a sense, I’m posting this sign on the blog for the month of December and at least part of January. I’m not actually closing the site–you’ll still be able to access posts that are already here, share them, comment on them, etc. (and please do!). I just won’t be creating anything new this month.

I’m taking some risks by doing this:

If any or all of these happen, I have to start almost from scratch to regain the visibility and momentum I’ve worked so hard to build.

But it’s worth the risk. If you’ve been reading here for any time at all, you know about Faith and the Magic Kingdom, my new book that I released last month. I was working on the content of that book for almost 3 years, coming up with new material in a very unique subject weekly. Then, beginning in February of this year, I began to compile, assemble, and self-edit the manuscript. Professional editing and cover design took another couple of months after that. Then came formatting, conversion to Kindle (a headache-and-a-half by itself), promotion, etc.

It sounds a lot less difficult and time-consuming than it actually was. Many, many late nights, which meant time away from the most important people in my life and sacrificing other important things, like anything even vaguely resembling a decent night’s sleep, for almost a year now. All of this was done while working a day job, producing an almost-weekly podcast, and more. Meanwhile, my mom passed away in late April, which affected everything in one way or another.

With the release of the book and completing a couple other projects I had in the works, I can finally step back a bit, and that’s what I intend to do. As I said, I’m not closing down this website–not a chance!–but this will be the last new blog post until at least the first (or perhaps the second) week of January. There will be no new podcast episodes this month either, though I did just record an interview yesterday for the next set of episodes and will hopefully record one next week for the the set after that. I’ll still be posting on social media, but perhaps not quite as regularly as you’ve come to expect.

What will I be doing? Well, for one thing, resting. It’s about time to reestablish a decent sleep schedule for a while. I’ll also be spending time with my wife, who has been very patient during this whole process and had to get far too used to not seeing me most of the night every night for weeks on end, and connecting with friends I’ve been neglecting.

But that’s not all. I’ve been doing pretty much the same thing here on the blog for 3+ years, mainly so I could get the material for the book written. I don’t have that same restriction now, so I’ll be reevaluating the content, direction, frequency, etc. of what I write. I want to serve you with what I write, so I’ll be seeking your ideas and feedback to make sure I do that. I may change the look of the website to make it more visitor-friendly and easy to use. I may start a podcast related to the book. I’ll definitely be crafting some new strategies and initiatives to take my speaking and coaching to a new level in 2014. Speaking for churches, camps, and other groups will be a huge focus for me!

I’m even going to Disneyland at least once just to enjoy it, which I haven’t done for a couple of years now. (I know it sounds strange, but in a lot of ways, Disneyland had become a workplace where I was always researching, looking for new material, and so on, and not really enjoying it the way it was created and meant to be enjoyed. It’s time for that to change.)

Most importantly, I’ll be refocusing on my relationship with God. I’ve been writing about Him, but honestly have spent so much time doing that and other necessary tasks that I’ve been neglecting time with Him. I wrote here on the blog and in the book about keeping your spiritual level full, and I’ve been letting mine get empty, filling it up just enough to get by. That’s not fair to God, it’s not good for me, and it means I can’t serve you well.

This has been a lot about me and what I’m doing or not doing, but let me ask you this: What have you kept doing because you’re afraid of what stopping might result in, or what you might lose if you do? But what might you gain by stopping that, at least for a while? God command the children of Israel to rest one out of every seven days, the Sabbath, and Jesus reminded us that this wasn’t for God’s benefit, or for the sake of keeping a rule. It was for us, because He knew we needed it.

During this time I’ll be spending some time seeking God’s guidance and wisdom for moving forward in 2014, but I also want your input. So please answer any or all of the following in the comments below (and feel free to write as little or as much as you want to):

Remember, this is for you, so your input is very important to me!

Thank you, Merry Christmas, Happy New Year, and I’ll see you in 2o14!