Sailing Ship Columbia: The Upper Story and the Lower Story 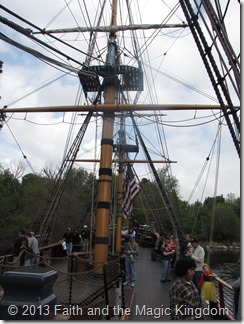 Unlike its sister watercraft on the Rivers of America, the Sailing Ship Columbia didn’t debut on Opening Day. Instead it joined the Mark Twain Riverboat on June 14, 1958.

The Columbia differs from the Mark Twain in two interesting ways. Besides the type of ship it is (a three-masted 18th-century merchant ship vs. a paddlewheel riverboat), the Columbia is not built on a forced-perspective scale. While the Mark Twain is built on roughly a 5/8 scale (with some modifications for operational and safety needs at Disneyland), the Columbia is a full-sized replica of the Columbia Rediviva, which was the first American ship to circumnavigate the globe, in 1790. That ship is also the ship after which the Columbia River was named.

On the top deck, you can observe the shore of Tom Sawyer Island glide by on the starboard (right) side, and Frontierland, New Orleans Square, and Critter Country on the port (left) side. The narration points out interesting sights. You feel the wind in your face and hear the detonation of the cannon as it fires.

Below deck, you are totally enclosed. The only way to see what you’re passing is if you look through the Captain’s quarters. You can explore a nautical museum, showing what life would have been like for the crew of the original ship. The living quarters are there, as is the galley, pantry, and sick bay. It can feel very confining down there, and there is no sense of where the ship might be. In fact, if you miss the narration that is occasionally heard below deck, only two or three minutes into the trip you’ll likely have no idea exactly where you are.

The day-to-day life happens below deck, but the ship is sailed from above.

Our lives—and history—are the same way. In The Story, Randy Frazee presents a condensed chronological Bible divided into 31 chapters, so people can come to understand God’s story and how our stories intersect with it. Throughout the associated resources, he draws attention to what he calls The Upper Story and the Lower Story.

The Upper Story is the big picture, God’s perspective, plan, and work throughout history to have—and then to restore—a relationship with people…with you. The Lower Story is human experience, with all its triumphs and tragedies. Most of the time in the Lower Story, people reject God, run from Him, hide from Him, and even battle Him, yet He relentlessly pursues us. Our day-to-day lives are the Lower Story, and God speaks into them with lessons, examples, and reminders.

The two stories start out as one, but then the Fall separates them. But the Bible tells us that one day, the two will be rejoined, just as our relationship with God will be fully and completely restored.

It’s usually through the Lower Story lens that we read, understand, and interpret Scripture, and that is entirely valid. But it doesn’t have the full picture. Without the Upper Story, the Lower Story doesn’t make sense, and it becomes all about our efforts, our strategies, just being “good enough” to earn a peek into the Upper Story. All the while, God tells us that not only is the Upper Story the lens by which the Lower Story makes sense, He has come to us to reunite the two stories in us.

On the Sailing Ship Columbia, that day-to-day living happens below deck, the ship’s “Lower Story.” But the purpose of that life, the reason for being on the ship, can only be seen from the upper deck—the Upper Story gives the crew perspective, direction, and purpose. Without that, life below deck can be burdensome, tiring, confining, and even boring.

Of course, there is a way to get a glimpse while below deck of this perspective: you have to look through the window in the Captain’s Quarters. Only by sharing the same view the Captain does when he is with his crew can they get a partial glimpse of that upper deck view. It’s not the whole picture, but sometimes it’s enough. John got that glimpse in Revelation 21.

“Then I saw a new heaven and a new earth, for the first heaven and the first earth had passed away, and there was no longer any sea. I saw the Holy City, the new Jerusalem, coming down out of heaven from God, prepared as a bride beautifully dressed for her husband. And I heard a loud voice from the throne saying, ‘Look! God’s dwelling place is now among the people, and He will dwell with them. They will be His people, and God himself will be with them and be their God. He will wipe every tear from their eyes. There will be no more death or mourning or crying or pain, for the old order of things has passed away.’”

That’s the destination, but he needed the view from the upper deck to see it. And once we have it, it can (and should) inform everything that happens below deck. That’s a mark of spiritual maturity. Having that Upper Story view, God’s perspective, helped Jesus endure the cross, and it can help you endure whatever you’re facing.

One other thought about these two areas of the ship. The sails and the ship’s wheel are on the upper deck. The anchor is below. Forward movement, progress towards the ship’s destination happens through the upper deck. Holding back, delay, even working against that progress happens below.

Again, the same is true in your life. The more time you spend focused on the Lower Story, the more that an anchor is your only sailing tool. In some it breeds fear, in others, hubris. Whatever the Captain may want to do, staying below deck, anchor at the ready says, “I’m not willing to follow You completely. I want to play it safe, to stay in the harbor and out of the storm. I’d rather stay where I am, where I think it’s ‘safe’ than to catch the winds and sail into the unknown.”

Focusing on the Upper Story is being willing to obey the Captain’s orders, man the sails, fire the cannon, or do whatever He says needs to be done to go wherever His navigation may take you.

The Good News is the Captain came down to the Lower Story, and provided a way into an Upper Story perspective. You just have to choose the view, intentionally and regularly. It’s not always easy, but nothing worthwhile ever is.

Question: We all find ourselves mired in the Lower Story, for most of us more often than we’d like. What is one way you can get that peek out the Captain’s Quarters, or even spend time on the upper deck? Talk about it in the comments below, or on our Facebook page.